Lauren Wood is a stunning model and newest girlfriend of NFL star, Odell Beckham -the wide receiver currently playing for the Cleveland Browns.

Lauren’s man is often described as one of the best players in the league. The three-time Pro Bowl wide receiver was traded to the Cleveland Brown last March and previously played five seasons with the New York Giants.

The Baton Rouge, Louisiana native attended Newman School where he played wide receiver, quarterback, running back, and cornerback. He played college football at LSU where he received the 2013 Paul Hornung Award.

He was then selected 12th overall in the 2014 NFL Draft by the New York Giants -becoming one of the most popular players. 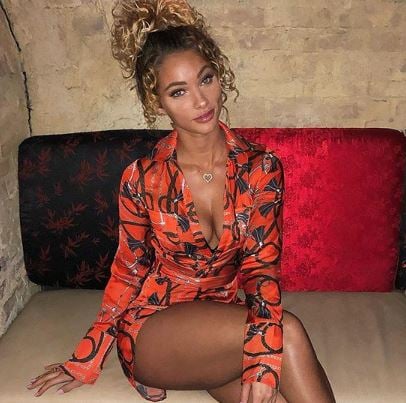 Outside the field, he’s been keeping busy with the stunning Lauren Wood. Prior to Lauren, Odell was in a relationship with Polyxeni Ferfeli and is safe to say the guy definitely has a type, the hot type.

Lauren Wood who goes by Lolo, is a triple threat, the Texas native is an actress, model and IG star. Born March 13, 1993; Lauren grew up one of three sisters.

Is safe to say Wood isn’t just a pretty face, it takes a certain amount of skill to become popular on social media and she certainly is. The brunette has earned over a million followers on Instagram often posting about her outfits and outings with friends. You may also recognize her from appearing on TV. Lauren actually appeared on the sixth and seventh seasons of the MTV improv comedy show Wild ‘N Out. In 2015, she was voted by the fans of Wild ‘N’ Out as their favorite girl on the show.

She and Odell were spotted together earlier this year and have yet to confirm their relationship. This wouldn’t be the first time she’s dated a professional athlete. Lauren was romantically linked to NBA player Eric Moreland.