Lauren Scrivens is the proud wife of NFL veteran player, Brian Hoyer -whom you probably recognize as a quarterback currently with the New England Patriots.

Lauren’s NFL hubby is in his third stint with New England, the 34-year-old first played with the team from 2009 until 2011 and again earlier this years after one season with the Colts.

Born Axel Edward Brian Hoyer on October 13, 1985; the Ohio native played college football at Michigan State and signed with the Patriots as an undrafted free agent in 2009. Since then, he’s also has stints with other NFL teams including the Pittsburgh Steelers, Arizona Cardinals, Cleveland Browns, Houston Texans, Chicago Bears, San Francisco 49ers and most recently the Indianapolis Colts before returning to the Patriots in 2020.

Off the field, Hoyer is a happily married man to the lovely, Lauren Scrivens; want to know more about her? Check out her top facts below.

1. She’s been an NFL wag for years

Lauren Scrivens met her future husband, Brian as a teenager while they both attended high school together in Ohio.
Lauren attended Magnificat High School, a Catholic all-girls school in a Cleveland suburb, while Brian went to St. Ignatius, an all-boys Jesuit school in the same area.
The two met after they were brought on a date by mutual friends. After dating for several years, the high school sweethearts became husband and wife in their hometown in Cleveland on July 2, 2010 -at a beautiful mansion called The Glidden House. 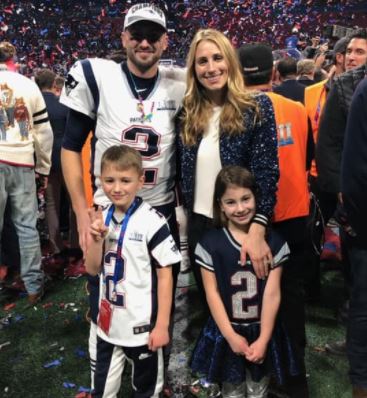 Since their nuptials, the couple has welcomed two children, a boy and a girl. Lauren Scrivens first gave birth to son Garrett; they are also parents to a girl, Cameron Hoyer -born in October 2013. As an interesting fact, Lauren tried acupuncture during her first pregnancy after she was told that because of her baby’s positioning, she would be forced to have a C-section.

While her hubby does his thing, it seems Lauren keeps busy mostly caring for the couple’s two young children.

3. She’s been supportive of his career

Lauren has been there for her man since day one; she has been by Hoyer’s side throughout his Michigan State and NFL career.
Lauren would drive to Michigan State every weekend to watch Hoyer play as an undergraduate, and she would travel with Hoyer to each of the cities that he’s played for.
Her hubby’s numerous contracts has forced the family to move several times, however during the off season the family lives in Ohio. Of his wive’s support, Brian said during an interview

4. She is super private

Despite being married to a famous professional athlete for a decade, Lauren seems to be very mindful of her personal life. The NFL wag and mother often shies away from the spotlight and is perfectly ok with her husband getting all the attention.

Since Lauren Scrivens is very private is only natural that she doesn’t do social media. The mom of two is not very active in any platform. Her Twitter account is set to private and her Facebook barely has any images.