Baltimore raven’s QB Lamar Jackson girlfriend is a mystery! The lovely Jaime Taylor likes to keep a low profile letting her man take all the spotlight, but girl we are dying to know more about you! 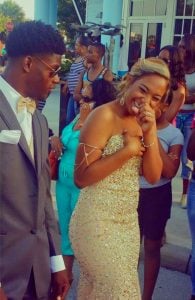 Lamar Jackson isn’t married and I don’t think he plans to any time soon, but he sure is without a doubt off the market. Lamar and girlfriend Jaime have been dating for several years.

We are pretty certain, that when Jackson considers the time for him to get married has come, he will pop the question to Taylor in a very special way.

Jaime Taylor is a wizard! no wonder she is a huge Harry Potter fan! This gal isn’t on Instagram, Twitter, or Facebook, unless she uses another name.

According to some sources, Jaime met Lamar in 2017, while they were in college, Lamar attended the University of Louisville, we can’t confirm if Jaime also attended at Louisville and met on campus.

But we know that Lamar and Jaime started dating later that same year.

Not many people have seen Lamar with his girlfriend Jaime, but she wasn’t shy to talk about her boyfriend to Clinton Brown who wrote an article for the ravens and included what KJaime said about Lamar.

“However, his girlfriend of two years, Jaime Taylor, is amazed at Jackson’s consistently upbeat outlook. Taylor says Jackson never lets outside noise define how he feels about himself.” wrote Brown.

“He’s taught me how to handle criticism,” Taylor said. “I mean, I used to get mad when I’d read stuff. Then I’d look at him, and he’s just fine. He says, ‘Let them do the talking. You don’t have to say anything. Just show them.” Lamar Jackson’ Girlfriend Jaime Taylor said.

Last Halloween, Lamar, and Jaime attended a Halloween party, and she knew exactly that she wanted their costumes to be a Harry Potter theme; therefore she had the whole thing prepare for both of them.

Watching his girl’s anticipation, Lamar had no choice but to agree to dress up as Harry Potter, even though he hadn’t watched the movies recently or seen the full film, because he fell asleep, due to the film’s length.

“Harry Potter. I was Harry,” Jackson explained to reporters when asked about his costume. “I thought it was pretty cool.”

“My girl she wanted [to do a Harry Potter theme]. Had the little coat on, I felt like I was back at the wizard’s place. It was pretty dope. …I wouldn’t say I am [a fan of Harry Potter]. ”

“Watched a few movies but it’s pretty long. I get sleepy. I’ll be watching it for like a good hour then [I fall asleep]. Then Harry Potter start watching me.”

Lamar Jackson’s number one girl is and forever will be his beautiful mother Felicia Jones, who according to sources is fond of his girlfriend Jaime and remains close friends with her.

“I was at Ravens’ game a couple of months ago, and saw a glimpse of his momma Felicia sitting next to a young lady, they hug when the Ravens score a TD, so I think that girl was Lamar Jackson’s girlfriend Jaime Taylor.

“Sadly I never got to see her face but she sure has pretty hair,” a source told us.

Like Jaime, Lamar’s mom Felicia is a very private lady. 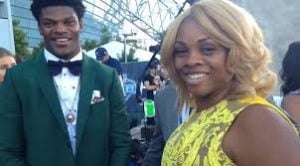 “She’s a very private lady,” former assistant coach at UL Lamar Thomas said. “She wants the glory to be on him. She’s done everything she can to put him in this position. She doesn’t like to do interviews. She just wants him to be successful, whether it’s academically or on the field.

Jackson said he appreciates and respects his mother’s approach.

He is the son of Felicia Jones and Lamar Jackson, Sr.; Lamar was just eight years old when he lost his dad, Mr. Jackson Sr. was 31 when he died of a heart attack, tragically his death came on the same day Lamar’s grandaddy also died.

Lamar attended Boynton Beach High School before he committed to the University of Louisville.

“A lot of people helped me get better when I was young, but the best coach I’ve ever had was also my first one: Mom.”

The Baltimore Ravens selected him in the first round (32nd overall) in the 2018 NFL draft; he made his debut in September 2018, after Joe Flacco’s injury against the Steelers.

Lamar’s debut came against the Buffalo Bills in Baltimore, where the Ravens defeated the Bills 47-3.

“I remember us winning the game. That was pretty cool,” Jackson said. “This year, [I want] the same result. That’s all I need to remember.”

While you won’t find Lamar’s girlfriend on social media, you can sure find him on Instagram here

Let’s hope the opportunity to meet Jaime Taylor comes pretty soon! I suggest you keep your eyes open, if you ever see his mom, take a close look at any young gal sitting with her!

Where does Lamar Jackson live?

Sources inform us he now lives in Owings Mills, Maryland. Please drop us a comment if you know he has moved.