Jill Myers is the lovely wife of veteran defensive tackle Kyle Williams –who has just announced his retirement from the NFL.

Jill’s hubby, who played his entire career with the Bills, will retire following Sunday’s 2018 season finale against the Miami Dolphins. The 35-year-old steps down following a 13-year NFL career.

Buffalo selected the All American senior, in the fifth round of the 2006 draft out of LSU, and he went on to become one of the most productive defensive linemen in team history.

He’s played at least 15 games in each of the past three seasons, and at least 14 games in 11 of his 13 seasons. The Louisiana native, became a five-time Pro Bowler who has registered 48.5 career sacks in 182 regular-season games, including a career-high 10.5 sacks in 2013.

In his retirement statement, Kyle made a reference to his wife and children. 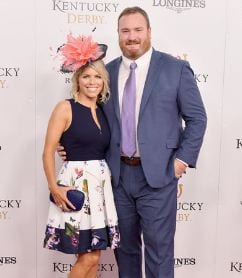 Jill Myers met Kyle Williams, while at LSU and the two married in 2005. She graduated with a degree in Kinesiology and a concentration in Health and PE and earned her teaching degree. She spent some time teaching PE in grades K-3. The pretty blonde is now a loving, dedicated and busy mom of five.

Jill Myers who now goes by Jill Williams is the proud mother of the couple’s five children. She gave birth to their youngest in 2017. She is described as a ‘super mom’ in a 2015 article –after all she’s not only able to handle her 300 pound defensive tackle husband but also, their five kids. She also shares that the time she spent teaching, has helped with her own kids saying “I learned to keep the kids busy and moving because when they get bored, they tend to act out or get in to trouble…its the same at home with our kids, too!”

The NFL wife has also been spoken about her faith, both she and Kyle are part of the Buffalo Bill’s team bible study with Athletes in Action.

In addition, the mom of five who tends to stay in the shadows during games, has been pictured looking pretty fashionable while at red carpet events, such as the Kentucky Derby –next to her man.