You are here: Home / NFL / Who is Kenny Young’s Girlfriend?

Kenny Young, the NFL player who until recently played for the Baltimore Ravens has been traded to the Los Angeles Rams.

The 24-year-old linebacker was traded for cornerback Marcus Peters and an undisclosed 2020 draft pick on Tuesday, the team announced. Young has 13 combined tackles in five games for Baltimore.

Kenneth Kim Young was born November 15, 1994; the New Orleans, Louisiana native was a four-star recruit out of high school and wound up picking UCLA. He was a standout for the Bruins, leading the team with 110 tackles, 8.5 of which were for a loss. He was named All-Pac-12 that year, adding a sack and three passes defensed to his stat line. 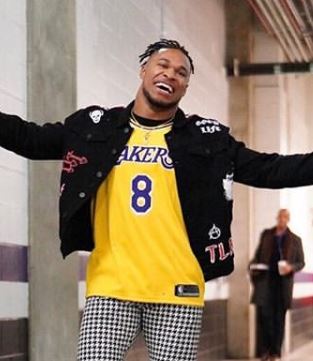 The Ravens took a chance on him in the fourth round, selecting him 122nd overall. Young started three games as a rookie in 2018, recording 2.5 sacks and 51 tackles.
Young was the ninth-fastest linebacker in Indianapolis last year, running a 4.60 40-yard dash, while also finishing fifth at his position in the bench press (23 reps). His 36-inch vertical jump was seventh-best at the combine among linebackers, as well. In the short-shuttle, he finished 15th at his position with a time of 4.48 seconds.

Things surely haven’t been easy for Young, and he has certainly faced adversity in the past. According to his NFL.com draft profile, lived with a friend when he was younger because his mom had trouble paying rent. His father was diagnosed with cancer during his sophomore season at UCLA, in the same year that his grandmother passed away.

Judging from his social media, is not clear if Young is currently single or not. He is the father of a toddler daughter named Chayah. He celebrated father’s day earlier this year sharing adorable photos of his baby girl. However is not clear if Kenny Young and his baby mama are still together and actively raising their child, or even the identity of the mother of his child for that matter.
A user by the name of Bria wrote in the comment section ‘There’s my girl! ? Happy 1st Father’s Day’