On March 26th, Katya Suh gave birth to lovely twin boys named Kingston and Khari Suh. Eight days before the birth of her sons, she celebrated her 30th birthday with her friends and family.

They have been together for a long time and are one of the most adorable couples.

Want to know more about Katya Leick? Here is all about the wife of the NFL player. 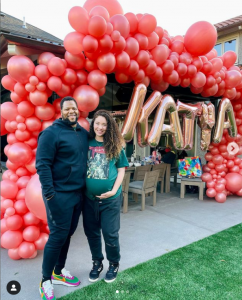 Where Was Ndamukong Suh Born?

Katya’s boyfriend NFL stud, Ndamukong Ngwa Suh was born on January 6, 1987; in Portland, Oregon native is the son of a Jamaican mother and a Cameroonian father. He is the second child of five; he has four sisters.

Suh played football at Grant High School and was a Heisman Trophy finalist while playing college football at Nebraska.

He was a terrific player who was a star performer in three sports that is, basketball, track and field, and football in his high school.

Ndamukong Suh and his wife Katya Suh welcomed their twin boys in March and is now a happy family of four.

Suh’s mother, Bernadette, is a graduate of Southern Oregon University and is an elementary school teacher. Bernadette met Michael Suh who is a mechanical engineer in Portland. They have five children where Ndamukong is their second child.

He was also the highest-paid players in the history of NFL when he signed a 6 year contract with the Miami Dolphins of $114 million in excess.

He was drafted 2nd overall by the Detroit Lions in 2010 and quickly made his presence felt with his dominant, physical play. In 2015 after spending five years with the Lions, he signed a six-year, $114 million deal with the Miami Dolphins, the highest contract ever for a defensive player.

The five-time pro bowl selection signed a one-year, $14 million contract with the Los Angeles Rams in 2018. According to Forbes, Ndamukong is the highest-paid defensive player in NFL history. Certainly a plus with the ladies, however, the 32-year-old is already off-the-market, the lucky lady is Katya Leick.

Ndamukong Suh’s net worth is $50 Million at present.

Find more about the football player on his social media handles here:

The couple has been going strong for over a year now, the two met in Miami during Suh’s days for the Dolphins.

The stunner is often seen on the sidelines cheering for her man and even wears ‘Suh’s Girl’ gear to show her loyalty to her man. They have lost in common as she used to be an athlete as well.

The curly-haired beauty played in the women’s basketball team for Kansas State, also where she obtained her Journalism & Mass Communications degree.

Born Katarina Leick on March 17, 1991; she is one of three daughters born to parents Malia and Scott; her sisters are Marissa and Kierra.

Katya previously attended the University of Nebraska-Lincoln.  She previously worked as a real estate agent at Compass and Keller Williams Realty and is now a CEO at Kalon Media. Additionally, she also puts her time and effort into modeling.

He married his girlfriend, Katya Leick in May 2020. The two got engaged in 2019 and got married in a not-so-traditional ceremony where they wore sweatpants and said their “I do’s.”

Katya Leick is now the wife of Ndamukong Suh.

Katya Leick went to Park High School and played basketball in the Minnesota Girls BasketBall Association and helped Park hit a 25-3 record. She won several titles and honorable mentions during her basketball career.

Katya Leick, a former basketball player was a part of the Kansas State University team. Due to the Journalism and Mass Communications background, she later became a news reporter at KNST.

Katya played with Huskers during the 2010-2011 season and played around 40 games in her career averaging 172 points in whole.

Katya is one of the Los Angeles Rams Hottest Wags

As her social media photos and sample images we’ve found below show, Katya is definitely one very pretty lady. For more gorgeous ladies like Katya, we have rounded up the top ten hottest LA Rams Wags that you can check here.

We have also written on the top ten hottest rams wags that you can check here.

Here are some gorgeous photos of the curly-haired beauty. 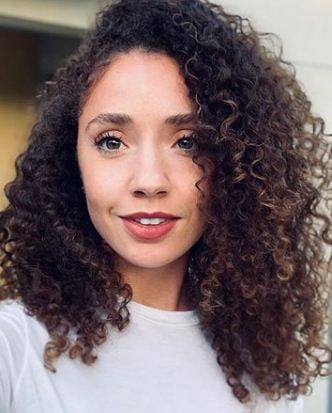 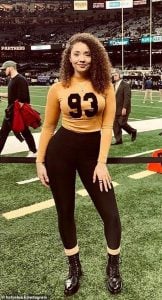 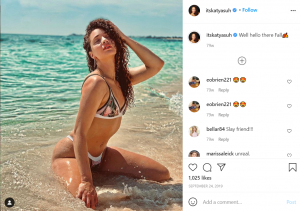 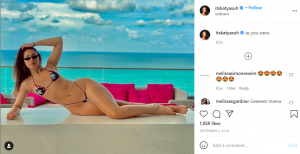 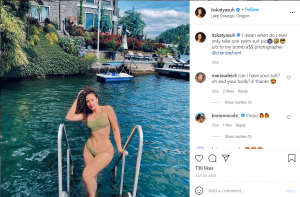