Stephanie’s son who is currently signed to the Kansas City Chiefs –is fighting more allegations of assault.

A few days ago footage made its way to media outlets of an incident that took place last February –involving the NFL player and a woman at a hotel in Cleveland. In the video, Kareem can be seen pushing and kicking a woman.

Now, a new video shows the 23-year-old running-back allegedly attacking someone else. The incident took place in January allegedly from a fight at a nightclub in the Power and Light District –and Hunt’s name appears on the Kansas City police report.

According to the document, Kareem Hunt was among a group of several men who beat the victim leaving him with a broken rib and nose. 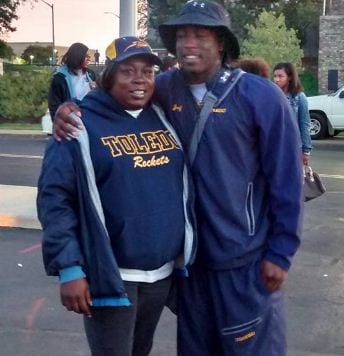 Stephanie Riggins and husband Kareem Hunt –welcomed son Kareem on August 6, 1995. The Ohio native began playing football in high school. In his junior and senior years of high school, he combined to rush for 5,204 yards and 83 touchdowns.

Following a successful college career at Toledo, he was selected in the 3rd round of the 2017 NFL Draft by the Kansas City Chiefs. He’s had so far, a good run with the Chiefs; he led the league in rushing last season. Hunt rushed the ball 181 times for 824 yards and seven touchdowns, while adding 26 catches for 378 yards and seven more receiving scores.

Riggins is a proud NFL mom who was born November 19, 1971. She has been supportive of her son’s career since day one. According to her social media, she is originally from Elyria, Ohio and resides in South Lorain –where she works as an independent health care provider.

Stephanie Riggins and her husband, Kareem Sr. are also the parents of Kareem’s brother Clarence Riggins. The mom of two is often posting pictures of her son, clearly proud of his every achievement. She is the person who has seen Hunt play the most.