You are here: Home / NFL / Who is Kareem Hunt’s Girlfriend?

Kareem Hunt, the NFL player you know best as a Running Back for the Kansas City Chiefs, seems to be currently single.

Born Kareem AJ Hunt on August 6, 1995; the Elyria, Ohio native combined to rush for 5,204 yards and 83 touchdowns in his junior and senior years of high school.

Hunt who played college football at Toledo was First-Team All-MAC twice (2014, 2016). Rushing for 271 yards and 5 touchdowns earned him the MVP of the 2015 GoDaddy Bowl. He was selected in the 3rd round of the 2017 NFL Draft by the Kansas City Chiefs after a successful college career at Toledo.

Hunt has been a rookie sensation who immediately impressed in his debut and has never looked back. He became the NFL’s leading rusher this season with 1,327 rushing yards set an NFL record with 256 yards from scrimmage in his debut.

It seems like thing are going pretty well for Hunt and the only thing he could possibly be missing is that special wag to make everything fall into the right place. 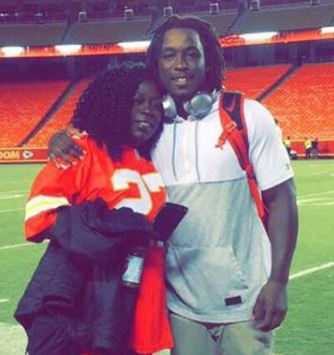 However, a quick look at his social media and is safe to say the rookie is into nothing but football and if there’s a special lady in his life, that place would belong to his lovely mother, Stephanie Riggins –of whom he often shares photos of.

In addition to his mother, he is also close to his stepfather, Deltrin Kimbro. Kareem’s father, Kareem Abdul-Jabbar Hunt –played basketball in high school.

That being said, Kareem Hunt is most definitely a great catch, who in earth wouldn’t like to date him. Let’s face it he’s got a brilliant future ahead and it’s just a matter of time for him to pick the one for him. The 22-year-old keeps active on social media posting about training, bowling night, and he doesn’t seem like the type he would hide his girl so most definitely, he is single.