Alicia’s NFL hubby was born May 29th, 1991; the Kentucky native was a championship caliber wrestler and track athlete in high school in addition to football. He played his college football at Missouri from 2010 to 2013 after being redshirted in 2009.

Justin was drafted by the Seattle Seahawks in the second round of the 2014 NFL Draft. He helped the Seahawks reach the Super Bowl in 2015, where they were defeated by the New England Patriots. As a rookie, he won the starting right tackle job in training camp and started every game of the regular season before unfortunately missing the NFC Championship game with an injury.

Through the ups and downs in the career of a professional athlete, Justin has been able to count with the unconditional love and support from his lovely wife, Alicia Bratten, nowadays best known as Alicia Britt. 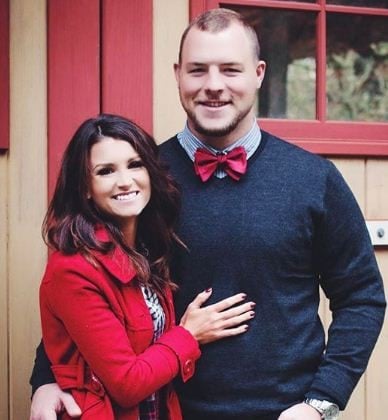 The two dated for years prior to their nuptials and even welcomed daughter, Navy Noelle back in 2012. The couple eventually tied the knot, becoming officially husband and wife in 2014. The lovely brunette gave birth to the couple’s second child, son Miller in 2016.

In addition to being a supportive NFL wag and mother of two, Alicia Bratten keeps a blog called, Britt & CO. –where she talks about lifestyle, motherhood, food, etc. On her page, she describes herself as a stay at home mom who ‘loves cooking and decorating, watching makeup tutorials, reading blogs, football, shopping, and going places with the kids.’ She also reveals that when not watching *** & The City reruns, most afternoons she’ll be taking a nap! You can also find on her blog a number of albums containing several photos of her adorable family.