Cindy Gruden is the loving and supportive wife of NFL coach, Jon Gruden –currently serving as the head coach of the Oakland Raiders.

Cindy’s hubby who returned to coaching this year, was recently named the Raiders head coach. This is his second stint as the teams coach as he previously served in the same capacity from 1998 until 2001. Gruden also head coached the Tampa Bay Buccaneers from 2002 to 2008.

Before returning to coaching in 2018, Jon served for the last nine years as an analyst for ESPN and Monday Night Football.

But behind every men’s success there is always a lovely woman, in Jon’s case that would be his wife of many years, Cindy Gruden. 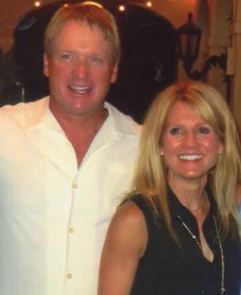 Mrs. Gruden was born Cindy Brooks. The blonde met Jon while attending college. At the time the two were students at the University of Tennessee where she was a cheerleader and he was part of the football program.

Long story short, the college sweethearts met, fell for each other and were eventually joint in holy matrimony in 1991. Since then, Jon and Cindy Gruden have welcomed three children. The couple are the proud parents of three sons: Jon David Gruden II best known as Deuce Gruden –born January 19, 1994. 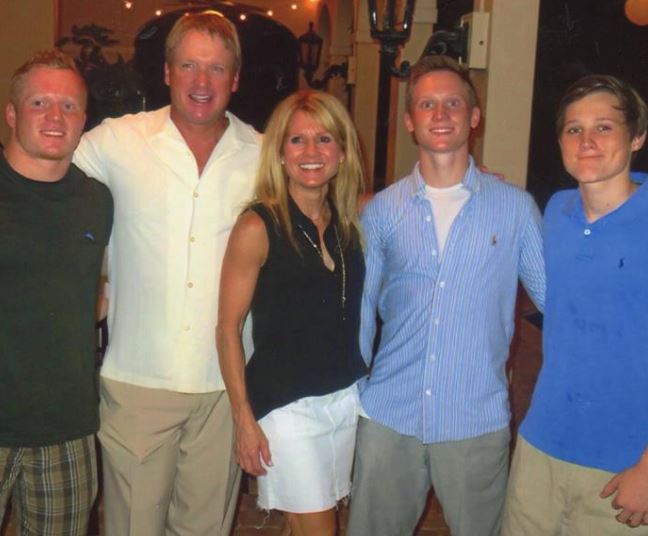 Their 23-year-old son is a former football running back who is currently employed by the Washington Redskins as part of their strength and conditioning staff. Gruden attended Lafayette, where he majored in biology and served as a tailback for the Leopards from 2012-15.

Jon and Cindy are also the parents of Michael and Jayson Gruden. Their son Mike Gruden Studied Marketing at University of Tennessee, Knoxville.

Cindy has been very supportive of her husband’s career, the two are often seen attending sporting events together. The mom of three is also a Moffitt Foundation Board Member.