Bre Tiesi is the Instagram model girlfriend of former Cleveland Browns quarterback, Johnny Maziel. The hot model has just been upgraded to fiancée and is one step closer to becoming an official NFL wag.

These two got together a few months ago, they were first reportedly dating in mid 2016 and since then have been inseparable.

She and Manziel were snapped by paparazzi’s back in June 2016 as they made their way into Los Angeles hotspot The Nice Guy.

Tiesi is one of many girls who have been linked to the controversial player. He was previously linked to Sarah Savage, Chantel Jeffries, Lauren Hanley, Kyndal Kyaire and Colleen Crowley.

Despite his antics and failed relationships, it seems Bre Tiese is the one that has stuck by his side, and that makes for one strong woman. Take for instance, during one of their dates, Manziel, known for his hard-partying ways got served with legal papers.

Her man has also been unable to take control of his career which has been spiraling out of control due to legal issues from a car crash. He’s also had to face domestic violence charges.

It seem like doesn’t matter how bad things get, Bre chooses to support the once NFL star. 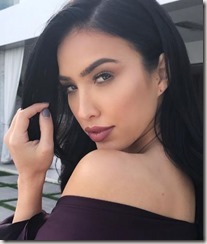 The sizzling brunette was born May 4, 1991 in Los Angeles, California. She chose a career in showbiz as a model an actress.

She gained major social media following after an article depicting her insanely resemblance to actress Megan Fox was published. 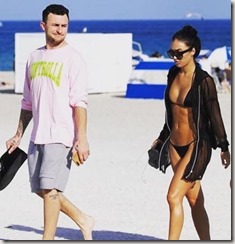 According to IMDb, she participated on the ‘8th Annual Babes in Toyland: Live from Avalon Hollywood, held in 2015. She has also modeled for the Knight of Cups and MMAthletics. Accoridng to Fabwags, she has also been featured in an ad for Effen Vodka with 50 Cent and appeared in Maxim’s Hot 100 list.

Her biggest gig to date, appears to be her appearance on ‘Wildnout’ with Nick Cannon, during the 8th season of the show. Most recently she was hired as a Corona Girl for the Canelo Alvarez vs. Miguel Cotto bout.