Dana Flacco is the loving and supportive wife of NFL star and former super bowl champ, Joe Flacco –currently a quarterback for the Baltimore Ravens.

Dana’s husband is said to be heading to the Denver Broncos, reports say that Denver has agreed to acquire the former Super Bowl MVP in a trade with the Ravens.

Born Joseph Vincent Flacco on January 16, 1985; the Audubon, New Jersey native previously played college football at Delaware after transferring from Pittsburgh. The 6′ 6″, 245 lbs quarterback, was drafted by the Ravens in the first round of the 2008 NFL Draft.

He started nine games in 2018 before a hip injury resulted in the Ravens turning to rookie Lamar Jackson. Flacco completed just 61.2 percent of his passes — his lowest mark since the 2013 season — and threw 12 touchdowns with six interceptions.

He is set to join the Broncos after 11 seasons in Baltimore. He helped lead the Ravens to seven postseason appearances, which includes a win in Super Bowl XLVII where Flacco was named the MVP. 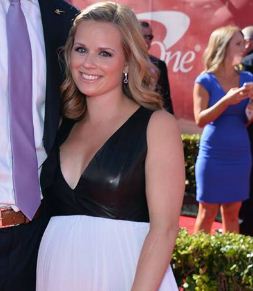 The 34-year-old and his wife, Dana have been together for a number of years.

Dana Flacco previously Dana Grady, was born on February 24, 1985 in New Jersey. She’s the daughter of Daniel and Deborah Grady.

Dana and hubby Joe, tied the knot in 2011 after dating for several years. The two met as seniors in high school. The pair were childhood sweethearts, as they attended Audubon High School together and grew up in the same town.

Dana is the mother of the couple’s five children. Dana Flacco first gave birth to son Stephen in 2012; he is followed by a brother, Daniel, born in 2013. Another boy, Francis made his arrival in 2015. The following year, a baby girl, Evelyn was born. Fifth child and fourth son, Thomas was born in 2018.

Dana and her hubby keep it pretty low key. Despite having an NFL star hubby the blonde keeps a low profile plus is safe to say she keeps busy at home with five little ones.