You are here: Home / NFL / Who is Jimmy Garoppolo’s Girlfriend?

Jimmy Garoppolo the NFL quarterback known for being the backup to Tom Brady, is currently a player with the San Francisco 49ers.

James Richard Garoppolo was born November 2, 1991, the Illinois native played college football at Eastern Illinois and was drafted by the New England Patriots in the second round of the 2014 NFL Draft. While playing with New England he won two Super Bowls.

Not long ago, it was easy to picture Jimmy as the natural successor to Brady but not anymore and he doesn’t seem to be losing any sleep over it. 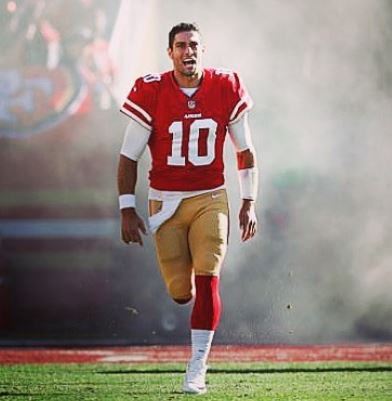 Garoppolo, the son of Denise and Tony Garoppolo, won the Walter Payton award as the most outstanding player in Division I football in 2013.

Garoppolo grew up in the Chicago suburb of Arlington Heights with two older brothers, Tony and Mike, and one younger brother, Billy. He played soccer, but was drawn to football thanks in part to his competitiveness. Following a standout collegiate career with the Eastern Illinois Panthers. He won Super Bowls XLIX and LI with the Patriots. He passed for 264 yards and a touchdown in his first career start.

Though he has shown his talent on the field, Garoppolo seems to be a lot shyer off the field. During an interview a while ago he wisely said “No girlfriend, single right now. … All in good time, you can’t force those things.” This was back in 2016, does he still feels the same? Honestly with professional athletes you never know.