Jilly Anais is the pretty lady currently in a relationship with NFL player, Deshaun Watson -whom you know best as a quarterback for the Houston Texans.

Jilly’s NFL stud boyfriend was picked in the first round of the 2017 NFL Draft, by the Texans. He was born Derrick Deshaun Watson on September 14, 1995; to mom Deann Watson.
One of four children, Deshaun set Georgia state records for passing yards, passing touchdowns, total yards and total touchdowns as a high school player. The Georgia native was a USA Today All-American at Gainesville High School in Georgia.
He later attended Clemson University where he led the team to the championship game in 2015-16. He also led the Tigers to an NCAA National Championship in 2016-17. Additionally, Watson was a Heisman Trophy finalist both seasons.

Off the field, Watson has also found love in the form of girlfriend, Jilly Anais. Her man became the second-highest paid quarterback after he signed a four-year, $160 million extension.
Let’s find out more about lucky lady, Jilly Anais in her top facts below. 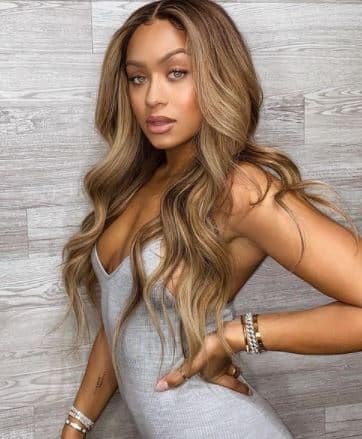 1. Jilly Anais and Watson have been dating since 2019

Anais who isn’t shy about their relationship, celebrated their one-year dating anniversary, by posting a touching tribute on Instagram. She wrote

“LoveBug, This year has been nothing but pure bliss!” “I love doing life with you.. You are my best friend, my pookie dookie, my motivation, my backbone, my happy place!”
“I fall deeper in love with you every second of every day! I love you, I adore you and I can’t wait to continue building unforgettable memories with you..,” “1 year down, forever to go! Happy Anniversary Baby.”

Anais and Watson first met at a restaurant in Los Angeles and later connected through social media. They later became friends and bonded at a hot yoga place.

2. She is quite popular in her own right

Jilly Anais who was born Jillyan Anais Moor -has always had a thing for the arts. In fact, she has a few acting credits to her name, including a 2016 appearance on the TV series “Freakish,” the drama series Rosewood as well as the 2019 drama “God Send.”
The stunning brunette has over 2 million Instagram followers.

Jilly also has her own YouTube channel with over 500,000 subscribers, and her very own website -where she describes herself as a ‘musician, actor, dancer, model, fitness guru and Influencer.’

3. She is also into music

According to her page, Jelly a Texas native, first made the move to Los Angeles to pursue a career in music. In 2015 she released “The Juice” EP, and has since worked with a variety of producers and directors.
As a dancer and actress, she’s worked with BET for the Grammy’s 2019 coverage. The SAG-AFTRA member also appeared in Demi Lovato’s “Cool For The Summer” music video.

4. She published a cookbook

Jilly Anais released her cookbook and lookbook “This Boss Babe Can Cookbook” last year. Her cookbook combines her shared love for food and fashion.

5. She was in a previous relationship with another pro athlete

Jilly Anais appears to have a thing for athletes, before she and Watson became a thing; the 25-year-old used to be in a relationship with basketball player, Dejounte Murray. Back in 2018, Murray publicly called her a “gold digger” after their breakup.