Jennifer Shurmur is the proud wife of NFL coach, Patrick Carl Shurmur -currently serving as the head coach for the New York Giants.

Jennifer’s husband is a Michigan native born April 14, 1965; widely known as Pat, he was a linebacker and offensive lineman at Michigan State University.
He began his coaching career as an offensive line coach at Stanford University 1998. He then became head coach of the Cleveland Browns from 2011 to 2012. He also spent time working for the Philadelphia Eagles and Minnesota Vikings before becoming the head coach of the New York Giants in 2018.

Pat Shurmur has been married to wife Jennifer for years, in fact, she also understands a few things about being a competitive athlete.

Jennifer who was born in Poughkeepskie, New York as Jennifer Lynn Collette on June 15, 1967 -has always been an athlete herself. She first started in dance and acrobatics, but found her place in the pool.
She swam at Michigan State, in fact she is known for having reached the top-10 all-time for her 200-meter freestyle finish in 1989 as well as the 1,650 freestyle and her 1986 relay team still holds the school record in the 400-freestyle. 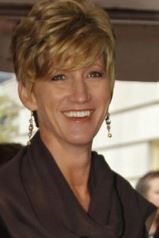 As you may expect, their story began after meeting at the Michigan State Weight Room. The two dated throughout college before getting engaged in 1988. The two have been married since 1990.
Since their nuptials, the couple has welcomed four children – Allyson, Erica, Claire, and Kyle. All four kids grew up around football and competitive swimming with all three daughters having competed at a high level.
Daughter Erica, like her parents, attended Michigan State. Daughter, Allyson was named to the All-ACC Academic Honor Roll at Boston College, and Claire is currently a student athlete in Minnesota.
The couple’s only son Kyle, is a quarterback at Vanderbilt.

Shurmur who has been her husband’s number one fan and supporter; decided to be a stay at home mom and take care of the couple’s children while her husband did what he knows best. While at Michigan State she studied pre-med in physiology and planned to attend medical school, however she let go of her professional career in order to be by her husband’s side.