You are here: Home / NFL / Who is Janoris Jenkins’s Girlfriend?

Janoris Jenkins, the 31-year-old best known as a professional football player, might be currently single?

Jenkins appears not only to be single but he is now out of a team too. Janoris Jenkins was until recently a cornerback for the New York Giants, that was until he had the brilliant idea of producing an offensive tweet directed to a fan.

According to ESPN, a couple of days ago Jenkins called a fan a “******” when taking exception to questioning about why the stats Jenkins was using to showcase his effectiveness weren’t contributing to victories.
Instead of apologizing, Jenkins came up with a ridiculous excuse saying, the word was “slang” that is “just part of my culture.” As a result, the Giants have now dismissed him. 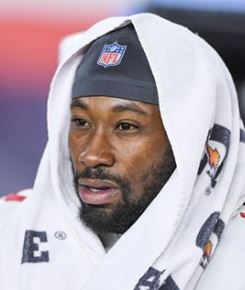 Jenkins was a First-Team All-SEC selection at the University of Florida in 2010 before having to transfer to the University of North Alabama. He was a 2nd round selection of the St. Louis Rams in 2012. He made solid contributions during his first two seasons with 113 tackles, 21 pass deflections and 5 interceptions.
He set a Rams team record during his rookie season by returning two interceptions for touchdowns in one game.
Over four seasons with the Giants (53 games), Jenkins snagged 12 interceptions and broke up 56 passes. He has 54 tackles this season and is tied for fourth in the NFL with four interception.

On the love department, the Pro Bowl cornerback, is the father of at least five children with four different women. His sons include Janorion, Janoris Jr. and Legend. He also has two daughters Paris and Journey.
Is safe to say Jenkins isn’t lacking company, however is not clear if he has a steady relationship at this time. He also keeps quiet about the identity of his baby mamas. According to the NY Post he said he has “nice relationships” with all the mothers of his children.