Jami Cantor is the former NFL Network female employee who has come forward with new allegations of sexual misconduct, this time against several former NFL players.

Cantor, a pretty blonde who use to work at the network, filed a complaint against NFL Enterprises alleging sexual harassment by several men while she was employed with the company. Find out more about her in her top facts below. 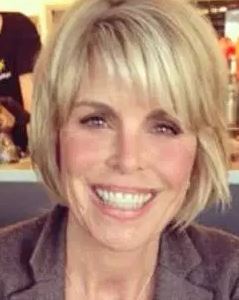 Jami Cantor worked as a wardrobe stylist at the NFL Network. She worked at the NFL Network’s studio in Culver City, California. Part of her job duties included building a closet full of clothes that on-air talent wore during shows on the network, the lawsuit said.

#2 She was fired from her job at the Network

Jami was hired at NFL Network in 2006, but was fired in 2016 when she was accused of stealing clothes — an allegation she denies. She originally filed a wrongful termination lawsuit for an unspecified amount against NFL Network in October. She claimed that she was discriminated against while working there because of her ***/gender/age, in addition to being sexually harassed, thus creating a “hostile work environment.”

#3 She is allegedly the victim of multiple former NFL players

#4 She is also after former NFL Network executive Eric Weinberger.

Cantor claims Weinberger sent “several nude pictures of himself and sexually explicit texts” and told her she was “put on earth to pleasure me.” Cantor also alleges Weinberger would at times press his crotch against her shoulders and ask her to touch it. The former NFL Network executive also allegedly made several lewd comments, such as telling Cantor she is “making him hard” and she “should be getting f—ed every day.”

#5 The men named in her suit have been suspended

Jami alleges Faulk invited her to his hotel room and stroked and pulled out his genitals in front of her, before pinning her against the wall, demanding oral *** while he pulled his pants down.

McNabb allegedly sent Cantor sexually explicit messages and comments during his time at NFL Network. He currently works for ESPN as a radio host.

Evans allegedly sent Cantor nude photos of himself on two separate occasions. He also allegedly insisted Cantor should have *** with him.

According to a spokesman for the NFL Network, Faulk, Taylor and Evans have been suspended while an investigation into the accusations is conducted.

Weinberger has also been placed on indefinite leave.

#6 Jami Cantor is a California native

Jami who is in her early 60’s was born Jami Lynn Cantor and grew up in Westlake Village. She attended White Oak Elementary School and graduated from the Fashion Institute of Design and Merchandising in Los Angeles.

#7 Her first job was as an interior designer

Jami Cantor served as interior designer for several homes and offices in the Los Angeles area. After that, she worked as the manager of an art gallery in Beverly Hills during the early 1990s, and that’s when her interest in being a personal shopper was piqued.

She then landed a job as a personal shopper at The Oaks Shopping Center in Thousand Oaks, California.

According to online records, Jami Cantor is the proud mother of three children, Zach, Karli and Bailey.

#9 Her daughter worked for NFL Network.

According to her Facebook profile, Karli Cantor Studied Broadcasting at San Francisco State University and is currently employed at Fullscreen. Her profile also states she was a video editor at NFL Network and at Spectrum SportsNet.

#10 She has an online profile on Houzz

According to Houzz – and online community about architecture, interior design and home improvement –Jami works as a wardrobe stylist inTV & for editorial. She writes: “I have been moving more into the direction of designing interior spaces vs designing looks for people. It’s more creatively challenging, which I need or I’m bored!”