Is the stunning girlfriend of Tampa Bay Buccaneers, Jameis Winston. Her 22-year-old NFL stud was born in Bessemer, Alabama on January 6, 1994.

Winston attended Hueytown High School, where he played both football and baseball. He was considered the best dual-threat quarterback recruit in the nation by Rivals.com.

Additionally, Winston earned the Gatorade Player of the Year recognition, for the state of Alabama. He led Hueytown to a state championship during his junior year.

He committed to attend Florida State University on February 3, 2012. 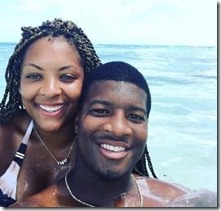 Gorgeous Breion Allen has been dating Jameis for a few years now. She was by his side during the 2015 NFL draft. The couple have a lot  in common, Breion is also an athlete. 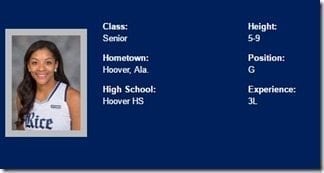 Breion Nicole Allen was born March 14, 1994 to parents Frederic and Taura Allen. The Hoover, Ala. native was raised along with a brother. She attended Hoover High School graduating in 2012. During high school she was a three-year letterwinner and two-year starter for coach Donnie Quinn.

She was rated second-best guard in Alabama by Bama Prep Girls. 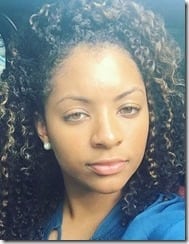 Breion moved on to play college basketball at Rice University –where she has been a valuable outside shooter off the bench.

She finished her career at Rice as a 29% three point shooter in 72 games played. She averaged 8.3 minutes played during her time in Houston.

In both of her two seasons at Rice, she’s been named to the Conference USA commissioner’s honor roll, which honors athletes who have earned a grade point average of 3.0 or above.

We might get to watch her more often as Allen is an aspiring sportscaster. She completed a summer internship at Comcast Sportsnet Houston.

For now she seems to have shifted her attention to real estate. According to her LinkedIn, she is listed as a real estate agent in the Tampa Bay area.

Breion Allen graduated in June 2016 with a degree in Sports Management and Sociology.

Breion who is pregnant with Winston’s baby is facing a whole new level of drama after the NFL announced that the 24-year-old violated NFL’s policy. As a result, the Buccaneers Quarterback was hit with a suspension which kept him from action in three games.

The move comes after it was revealed that Winston took the blame in a sexual harassment indecent which took place in 2016.

Jameis was accused of assaulting an Uber driver –who revealed back in November that Winston “reached over and he just grabbed my crotch.” He had initially denied the accusations but in a recent statement he apologized to the driver in question instead.

Jameis and Breion have been together for years and are still together which means she has forgiving him for the sexual harassment incident. The two are currently engaged and expecting their first kid together.