Claire Kittle is the gorgeous wife of NFL player, George Kittle -whom you known best as a player for the San Francisco 49ers.

Claire’s NFL hubby played NCAA Division I football for the Big Ten’s University of Iowa Hawkeyes between 2013-2016.
The Wisconsin native has made a name for himself playing for the San Francisco 49ers, who drafted him in the 5th round of the 2017 NFL Draft. He made his first career Pro Bowl in 2018 with the club.

He set the then-NFL record for most receiving yards in a season by a tight end in 2018. He was named to the NFL’s All-Pro second team following his breakout 2018 season.
At 26, he is already a married man, he and long-time girlfriend Claire became engaged in September 2018. The 49ers tight end popped the question on the beach in Santa Cruz, California. The couple tied the knot in April of 2019.
It appears the love birds eloped as there is a registry from Anthropologie baring the couples’ names and a wedding date for March 27, 2020.

The stunning Claire Kittle was born Claire Colette Till. According to her social media, Claire is from Dubuque, Iowa. She attended the University of Iowa -where she played basketball and met her future hubby. In addition to basketball she also enjoys volleyball and football. 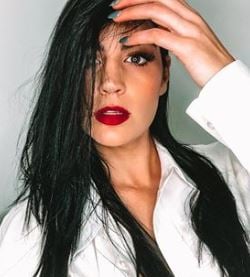 The stunning brunette with model looks is well known as George’s sweetheart and since then she has gained quite the following on social media. It appears she has become somewhat of a travel blogger snapping images wherever she and her man go. In fact, she has her own blog called ‘Lettey Set go’

On her page, she states she started the blog to share her story and has evolved to tips and tricks about traveling. Claire claims she is an open book writing ‘You’ll find travel inspo, where to go, when to go, and how to do it right. Fashion and beauty creativity. As well as anything and everything I am currently experiencing in my life’
She also reveals ‘Letty’ is a nickname George gave her as a short for her middle name, Colette.
In addition, an old profile says she is represented by a JE Model Managament.