Michelle Martin is the late mother of former NFL player, George Atkinson III -who is said to have died by suicide. He was 27.

Michelle’s son’s tragic death comes nearly a year after the death of his brother, Josh Atkinson -who was George’s twin brother. Josh also committed suicide.
Earlier this year, Atkinson opened up about his brother’s death and also revealed their mother suffered from paranoid schizophrenia and drug addiction and that he and his brother later went on to live with their father, Super Bowl champion George Atkinson II.

Michelle Martin died from Crohn’s disease in October 2018 and it was George and Josh -who made the decision to end her life support. George also wrote that he and his brother were grieving about their mother’s death and though his brother was taking it better than he was. Josh hanged himself in December of 2018. 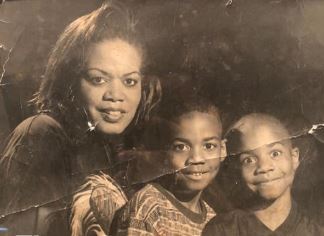 Michelle Martin’s schizophrenia, led to drug addiction. Crack being her main choice. She would think people were out to get her or she would hallucinate. Eventually, she’d get 5150’d, which is where she was forced into an institution.
Michelle Rene’ Martin was a California native attended Delta College and became a Certified Activity Director. At one point she also joined the California Conservation Corps on San Francisco’s Yerba Buena Island.
According to her obituary she was 58 at the time of her passing. She is survived by her first born Julius Martin -from another relationship.

Both her sons, George and Josh were part of Notre Dame’s 2011 recruiting class. Both brothers played football at the University of Notre Dame during their athletic careers. Atkinson III also later played for the Oakland Raiders and Cleveland Browns, the Kansas City Chiefs and the New York Jets.

George played 21 games and was mainly a kick returner. He did score a rushing touchdown for the Browns in 2016. Atkinson’s last NFL stint was on the Jets’ practice squad.