You are here: Home / NFL / Who is Fletcher Cox’s Girlfriend?

Fletcher Cox, the 26-year-old fella we all know as a defensive tackle for the Philadelphia Eagles is making headlines and not exactly for his career in the NFL.

While we all though Cox was doing his thing –being an awesome Eagles player –while also being a single man, we were wrong. Cox was actually getting busy with none other than a married woman! According to reports however, the fun is over since the husband of his alleged ‘hook-up’ is certainly not happy and has gone as far as suing Cox.

It has been revealed that Fletcher is being sued for more than $25,000 for breaking up the marriage of Joshua Jeffords and his wife. According to the suit Fletcher and Joshua’s wife had *** earlier this year. The question remains on who is the woman in question, she and husband Joshua are currently based in North Carolina.

The suit also reveals the woman Cox slept with has blocked her husband from social media and their marriage has fallen apart as a result of the affair.

Is not exactly clear if Fletcher and the alleged woman are still together or if it was just a temporary thing. 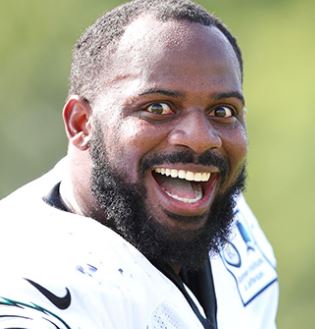 Cox was born December 13, 1990; the Mississippi native played football at Yazoo City High School in Mississippi and later attended Mississippi State –where he was a first-team All-American.

The defensive end made his NFL debut in 2012 with the Philadelphia Eagles after being drafted in the first round by the team. In June that year Cox was signed to a four-year contract. During his rookie year in 2012, Cox played 15 games and finished with 39 tackles, 5.5 sacks, 4 passes defended, and 1 forced fumble. Last year he grabbed headlines after a signing a six-year, $102 million contract extension.

Cox –who is regarded the backbone of Eagle’s dominant defensive line, registering 14 tackles, 4.5 sacks, a forced fumble and a fumble recovery –has made no comment on the suit and not much more is known about his private life.