Gabriella Sanders is the stunning wife of NFL player, Emmanuel Sanders. Her man is a wide receiver for the Denver Broncos and the two have been married since 2013.

Gabriella’s NFL man was born Emmanuel Niamiah Sanders on March 17, 1987. He spent his first four years in the league playing for the Steelers. Sanders was drafted in the third round, 82nd overall by the Pittsburgh Steelers in the 2010 NFL Draft.

Sanders attended Belleville High School on Texas and then attended  Southern Methodist University. Emmanuel signed a  three-year deal worth $15 million with the Denver Broncos on March 15, 2014.

Sanders has only been playing for the Broncos for two seasons, but according to experts, they have been the most productive of his six-year NFL career. He has 101 passes for 1,404 yards and nine touchdowns in 2014. In 2015, he collected 76 receptions for 1,135 yards and six scores. 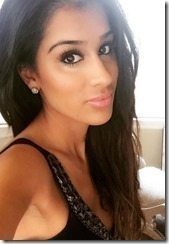 Off the field, you could say Sanders also found success. He popped the question to his then girlfriend, Gabriella in March 2013. Thought the exact date of their wedding isn’t clear, most sites refer to Gabriella as his wife or Mrs. Sanders. It is believe they have been married for about three years approximately.

Since then, they pair have welcomed two children. Gabriella Sanders gave birth to the couple’s baby boy Princeton Emmanuel Sanders in February, 2014. She gave birth to a daughter, Zoie in 2016. 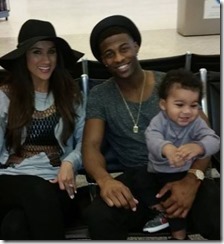 Gabriella who was born Gabriella Waheed is seven-years older than Sanders. She was born February 13, 1980 and is originally from Flushing, New York. She is one of four children born to Waheedullah Waheed. Gabriella’s siblings include one brother named Adam and two sisters, Galaxy and Sabrina Waheed.

Having her body and her looks, is not strange she has done some modeling. She posed for Bikini Crush Swimwear, looking absolutely stunning. In fact, fashion might be her only interest for the moment. According to her Instagram account she writes on her bio, CEO and fashion designer.

She previously worked in a number of television and film production projects, according to her Facebook profile.

Sadly, despite of her busy life as a working woman and mom of one, not everything seems to be going right. Rumor is that she and Sanders are having major marital issues and they could pull the plug on their marriage any minute now. In fact, things are so bad between them, Gabriella who filed for divorce in October 2016, stated there is zero chance for reconciliation.

She and Emmanuel Sanders shared a home in Texas –where she is currently based.