You are here: Home / NFL / Who is Derrick Henry’s Girlfriend?

Derrick Henry, the NFL player whom you know as a running back for the Tennessee Titans seems to be single and ready to mingle.

The 24-year-old is having a great start to the year, as you probably heard, he’ll be starting in today’s game against the Chiefs. Reports say Derrick will start in Murray’s place and will presumably handle the majority of the carries.

This is Henry’s opportunity to prove himself, if only he had someone special to share it with.

Born Derrick Lamar Henry Jr. on January 4, 1994; the Yulee, Florida native was raised mostly by his grandmother since his parents Derrick Henry, Sr. and Stacy Veal –were virtually teenagers when he was born. As a tribute to his grandma he tattooed her name on his chest.

Derrick Henry rushed for a national record 12,124 career rushing yards during his high school career and was named the 2012 Columbus Touchdown Club National High School Player of the Year. He was a football, basketball and track star at Yulee High School in his hometown. 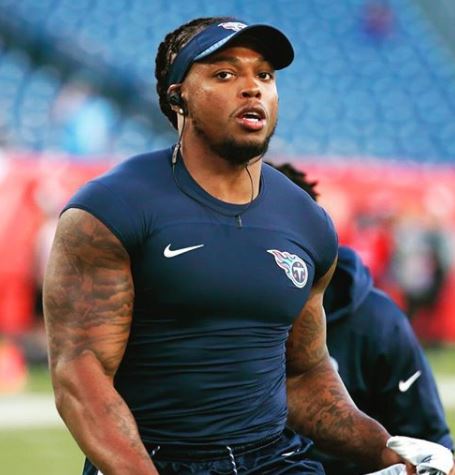 As a member of the Alabama Crimson Tide, Derrick won the 2015 Heisman Trophy as well as the 2016 NCAA National Championship. He was subsequently chosen by the Titans in the second round of the 2016 NFL Draft.

It appears the young professional football stud has everything going for himself these days, however we’ve notice he doesn’t have a chick. A quick search through his 635K follower Instagram page and is easy to tell Derrick Henry is into working out, posing for the camera and of course football –but no special lady on sight.

When speaking about his grandmother Henry says

“She’s taught me a lot and she’s still teaching me. Just always keep my head on straight, stay humble and keep God first.”

So you know he’ll probably be good boyfriend material. Sometimes not having a girlfriend can result in more focus at games –which is what Derrick who splits time between Nashville and Yulee, Fla. seems to be doing.