Davontay Moore is the stunning girlfriend of NFL player, Demarcus Robinson -whom you may recognize best as a player with the Kansas City Chiefs.

Devontay’s Wide Receiver entered his fourth season with the Chiefs in 2019. Born September 21, 1994; the Georgia native originally entered the NFL as the fourth round pick of the Kansas City Chiefs in the 2016 NFL Draft.

Robinson caught 106 passes for 1,355 yards and nine touchdowns in three seasons (2013-15) at Florida, including a school-record tying 15 for 216 and two touchdowns in a triple-overtime win against Kentucky in 2014 — the best receiving game by a Gator in 12 years. However, he was also suspended three times for failing a drug test due to ********* and once for a violation of team rules.
Robinson’s fourth pro season already has been the best of his career. He snagged 32 passes for 449 yards and four touchdowns in the regular season, and three passes for 35 yards in the team’s two playoff games combined. 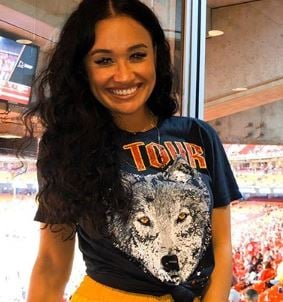 It’s an exciting time for the 25-year-old who is also expecting his first child, with girlfriend Davontay Moore. The two have been in a relationship for at least five years. She met Demarcus while in college.

Davontay D. Moore was born on October 9, 1992, in Wichita County. Her mom who hails from Hawaii is Maria Moore and her dad Richard Moore, is a former Lieutenant Colonel in the US Air Force.
Davontay attended at Lowndes High School where she played basketball with the Vikettes.

Devontay Moore who is very pregnant, is quite the looker. The stunning black haired lady has also quite the following on social media for a mere mortal. She has over 5k on Instagram where she also writes ‘Got God’
Like her man, Devontay Moore also attended University of Florida graduating in 2015 with a Bachelors of Science, Sports Management, Event management; and was also an intern of the University of Florida Athletic Association.