Deja Harris is the lovely lady currently in a relationship with NFL player, Rashaad Penny –a running back for the Seattle Seahawks.

Deja’s NFL beau was a stand-out running back at San Diego State drafted in the first round of the 2018 NFL draft by the Seattle Seahawks.

Born on February 2, 1996; the California native finished fifth in Heisman Trophy voting in 2017 after leading the nation with with 2,248 rushing yards while scoring 23 touchdowns.

Rashaad is currently in a relationship with Deja Harris, whom she met at San Diego State; the two have been dating at least for the past year.

His girl most definitely knows a thing or two about being a competitive athlete. Sabine is a student athlete at San Diego State University –where she is a middle blocker with the Aztecs women’s volleyball team. 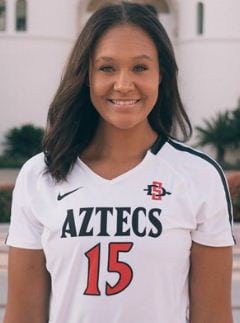 Deja Sabine Harris is a Las Vegas native, daughter of Adrian and Merlelynn Harris and has three younger sisters. Deja has that athletic gene advantage, according to her university profile, her mother, Merelynn, was a professional basketball player in Europe and in the WNBA, as well as a member of the Canadian Olympic team. Her father Adrian played football at University of Nevada Las Vegas.

Deja Harris attended Calvary Chapel High School –where she played four seasons and was named the Gatorade Player of the Year for the state of Nevada as a senior in 2013. Harris also played center and forward on Calvary Chapel’s basketball team, but she later decided to focus on volleyball.

During her junior year at SDSU, the 6-foot-2-inches player, was named an All-Mountain West selection for the third consecutive season after finishing third in the conference in blocks per set (1.28) and hitting percentage (.342). Harris was the only player in the conference to finish in the top seven in points per set, blocks per set, and hitting percentage.

She is currently in her senior year at SDSU, where she is majoring in pre-med with a minor in psychology. She hopes to become a sports psychologist at a university.