Chenika Chambers is the proud mother of NFL player, Deandre Baker -best known as a cornerback for The New York Giants.

Chenika may not be as proud of her 22-year-old son after the young player was recently charged with serious crimes including four counts of armed robbery with a firearm and four counts of aggravated assault.

In addition to Deandre, Chenika Chambers and her husband Andre Baker, are also the parents to other four children; daughters Jameshia, Asia and Paris; as well as son, Andre Jr.

Jameshia works as a high school teacher. Andre attended Albany State. Asia is in the pharmacy program at the University of Florida; and Paris is a high school student and track standout.
According to onlineathens.com; Chenika Chambers is described by her family as a ‘fashionista.’

According to a professional profile, Chenika Chambers works in event planning. She is listed as the president at Outrageous Events in the Miami/Fort Lauderdale Area. While her husband, works in property management. 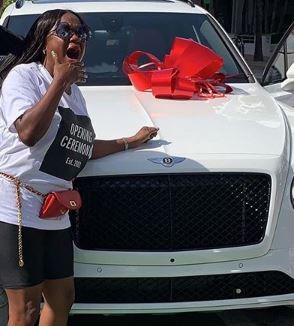 Her now famous son was born, Deandre Lamar Baker on September 4, 1997. He grew up in Liberty City, the neighborhood in northwest Miami. He played high school football at Miami Northwestern -where he was also an All-American Sprinter. He later played for the Georgia Bulldogs and was deemed one of the best defensive backs in college football during his senior season. He was was projected as a top 15 pick back in December 2018.
Deandre was drafted 30th overall by the Giants in the 2019 draft and signed a lucrative four-year contract worth $10.5 million, including a signing bonus of $5.67 million.

His family has certinaly enjoyed of the perks, as Deandre gifted his mother a Bentley SUV last June.

The 22-year-old is currently being accused of stealing more than $12k in cash and expensive watches from guests at a party in Miramar. His defense however, says Deandre had been playing Madden, when the incident took place. Baker was released on $200,000 bond on Sunday and is currently staying with his parents in Miami.