Meghan Brock is the stunning wife of NFL player, David Johnson –whom you may know best as a running back for the Arizona Cardinals.

Johnson was selected in the third round (86th overall) in the 2015 NFL Draft by Arizona Cardinals. He made his NFL debut against the New Orleans Saints on September 13, 2015.

Meghan Brock attended Northern Iowa, exactly where she and David first met. Long story short, the two hit it off and got engaged in 2015. The couple tied the knot in April of 2016, in Tempe, Arizona. 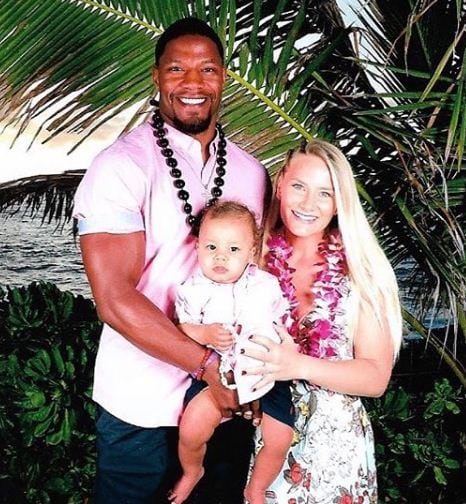 In addition to being an NFL wife and devoted mother of one, Meghan Brock is also a certified nurse. She has taken nursing classes at Kirkwood and also worked at NewAldaya Lifescapes.

Since their nuptials the two have extended the family welcoming an adorable baby boy named David Jerome Johnson Jr. and whom the couple calls, DJ. DJ was born in early 2017.

You may also recognized Meghan Brock from her TV credits. She and her hubby were both featured in the TV documentary, Amazon.com: All or Nothing: A Season with the Arizona Cardinals. During filming, Meghan then only his girlfriend, is seen settling down in Arizona, along with her man and their dog, Emmitt.

Since then, Meghan has kept active on social media and has also gained a major following as an NFL wife.