Kylie Deeann Fales is the stunning NFL wag married to quarterback David Fales -who has been signed to the New York Jets.

Kylie’s husband has completed 31 of 48 passes for 287 yards, one touchdown and one interception in his NFL career. The 28-year-old California native played college football at San Jose State.
He was drafted by the Chicago Bears in the sixth round of the 2014 NFL Draft. He was released by the Bears in 2016 and was signed to the Baltimore Ravens’ practice squad. He returned for a second stint with the Bears two months later.
He then served as a backup quarterback in Miami for two seasons until June 2019 when he signed by the Detroit Lions. Fales was with the Lions this summer, but was waived in August. 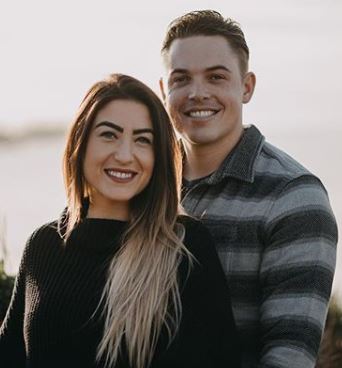 The hunky free agent has now found a new home with the Jets. According to reports, Fales was signed as a backup to Luke Falk for Sunday’s game against New England.

Fales who has very little NFL experience – he’s played in three games -hasn’t played in a regular-season game since 2017 when he was with Dolphins.
However, he sure has major support from lovely wife, Kylie Deeann Fales. Kylie and David dated for several years prior to their 2018 wedding. She is the mother of their adorable baby girl. The couple welcomed a baby girl whom they named BoDee Haiz Fales -on September of 2018.

According to her LinkedIn, Kylie Deeann Fales is a California native who attended Liberty University where she graduated in 2017 with a Bachelor of Science -BS -Bsuiness Administration Communications. She is currently listed as a social media manager. Kylie previously worked as a Starbucks Barista and also served as a physical therapist assitant at Balance Physical therapy.

The lovely brunette is active on social media, despite being a busy mom Kylie finds time to keep her platforms updated. She can be found on Facebook, Instagram and Twitter. On Instagram, she often shares images of the young family, her dogs Vixie and Luna and life with her NFL hubby.