While he was playing at Little Elm, Cole played in the quarterback position, it was until college he shifted to wide receiver.

He played college football at Southern Methodist University –where he committed over an  offer from the Air Force, majoring in sociology.

As a senior, started all 12 games he played and led the team with 86 catches for 1,040 yards (second on the team) and a pair of touchdowns.

He was signed by the Cowboys as an undrafted free agent in 2012. That year he was sent to the Dallas Cowboys U High School Camp. Though he left during training camp, he would return having a change of heart to make the final 53-man roster. He made 15 receptions for 98 receiving yards in 10 games of his rookie year.

Cole has been a married man since 2014. His wife is the pretty, Kyrstin Beasley.

Accoridng to the Knot, the smiley gal and the NFL player got married on July 28, 2014 in COPPELL, TX. 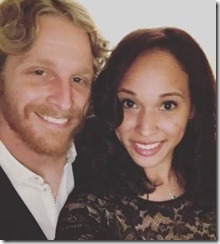 Kyrstin Beasley is very clear when it comes to social networking rules. Thought she is active on Instagram, her account is set to private with the warning: ‘This page is for family and friends ONLY. I don’t accept requests from people I don’t know.’

Kyrstin has been described in other sites as having a short temper. The wag has been spotted lashing at her hubby’s fans when they criticize him. Would you call that short temper or just being supportive of her man?

Thought she might not be as friendly with her hubby’s critics, Kyrstin is, naturally, her husband’s biggest fan. She keeps busy often posting highlight videos of the Cowboys wideout on her Twitter page throughout the season.

The family of three is currently looking to expand with Kyrstin and Cole welcoming their second child in early 2017.