You are here: Home / NFL / Who is Clinton Portis’ Girlfriend?

Clinton Portis, whom you may know better as a former NFL running back -is up to his neck in debts.

The Mississippi native born Clinton Earl Portis on September 1, 1981; was drafted in the second round of the 2002 NFL Draft, being voted the Rookie of the Year and finding success with the Denver Broncos before being traded to Washington. 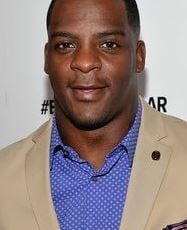 He played for the Denver Broncos and with the Washington Redskins over nine seasons. During his time in the NFL, he made some serious money, including a 2004 contract for $50.5 million over eight years that made him the highest-paid running back in the history of the NFL.
He quit the NFL after a concussion in 2009 and groin injury in 2010.

Ever heard that saying that, a woman can be the ‘ruin’ of a man? Well it appears that it kind of came true for the ex-NFL star. According to reports, Portis allegedly declared bankruptcy after spending millions with a girlfriend/s. According to the Dailymail, he owes at least four different women in domestic support payments, including a woman named Jamillah Wade. Portis is the father of at least tow kids, Camdin and Chaz Portis.

In addition he owes 500k to his mother and oddly enough, he also owes another 500k to Entertainment Tonight reporter Nischelle Turner. The report goes on to say it is not clear why he would owe Turner. Adding to his current bad streak, Portis is among a number of ex-NFL players accused of fraud.
Portis and other are accused of defrauding a league health care program by submitting fake invoices for medical equipment, which they never actually purchased.

Not clear if Portis is currently in a relationship. Find Clinton Portis on Twitter here.