Toni Doleman is the wife of NFL Hall of Famer, Chris Doleman -who passed away earlier this week at age 58.

Toni’s husband died after battling cancer for two years, he had been diagnosed with glioblastoma ever since he underwent surgery to remove a brain tumor in January 2018.
Born Christopher John Doleman on October 16, 1961; the Indianapolis, Indiana native played college ball for Pittsburgh before he was selected by Minnesota in the first round of the 1985 NFL draft. He was drafted fourth overall in the 1985 draft out of Pittsburgh.

Dolan, a defensive end, went onto become one of the NFL’s most feared pass rushers during 15 seasons in the league.
He spent 10 seasons with the Vikings, the other five seasons he split between the Atlanta Falcons and San Francisco 49ers -before finishing his career with Minnesota in 1999. He was a first-team All-Pro selection on two occasions, and also made eight Pro Bowls. He was inducted into the Hall of Fame in 2012. 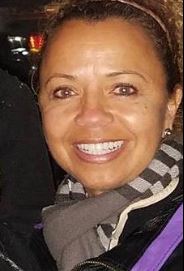 During his hall of fame speech, he thanked wife Toni saying ‘To Toni Doleman, the mother of my children, you were with me throughout my career, and I want to thank you for your support and giving me two of the greatest gifts you can ever imagine in Taylor and Evan’

Toni Doleman was born Toni Yuille on September 26, 1961. Is not clear when or why she and Chris divorced. He married LaTresa Cunningham in 2018. Chris met new wife, LaTresa Doleman in 2017, according to nbc sports, less than a year later, though, she went from being Doleman’s girlfriend to also being what he called his “caretaker.’’

Toni Doleman who was married to Chris for many years, said in an early 90’s interview -Chris would ask her how she though he had played and they both would go back and forth and review the game.
She is the proud mother of the couple’s two adult children, son Evan and daughter, Taylor Marie Doleman -who is a real estate photographer according to her website. On social media, Taylor Doleman describes herself as ‘Photographer-Ameteur Foodie-Traveler-Beating to my own drum-Hippie Happy’