Kia Proctor is the lovely girlfriend of NFL star, Cam Newton. She and the Carolina Panthers QB have been together for a long time, read more about Kia Proctor and her story with Newton below!

Kia Proctor’s boyfriend was born Cameron Jerrell Newton on May 11, 1989. The ATL native is the son of Cecil Newton and has two brothers, Caylin and Cecil Jr. He attended Westlake HS in Atlanta, Ga.

He became the third player in college football to both rush and pass over 20 touchdowns in a season. He also led his Auburn Tigers to a BCS Championship to cap off the historic 2010 season.

He was named NFL MVP for the 2015 season and he helped lead the Panthers to Super Bowl 50 in 2016 –after a historic 15-1 season where he accounted for 45 total touchdowns.

Newton has also had his share of controversy. Cam who initially attended the University of Florida, where he was a member of the Florida Gators football team in 2007 and 2008; was arrested for stealing a laptop from a University of Florida student in 2008. He then continued his college career at Blinn College, Texas, where he won the NJCAA National Championship.

Newton started the first game of Auburn University‘s 2010 season. He majored in sociology.

Cam Newton signed a contract extension with the Panthers in June 2015. According to Forbes, he signed a new five-year, $103.8 million contract extension ahead of the 2015 season. His total earnings of $53.1 million, including salary, bonuses and endorsements, made Newton the NFL’s highest-paid player over the past year.

What’s the next nest thing about being Cam Newton? Of course that would be, being his girl, Kia Proctor. 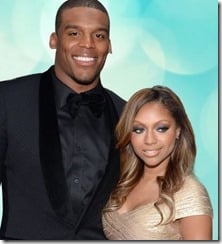 Though Kia and her man are yet to become husband and wife, the two share a strong bond together. They became first time parents after welcoming son, Chosen Newton in 2015.

That means Kia Proctor is surely more important that the average girlfriend. The wag and baby mama gave birth to Chosen Sebastian Newton on December 24, 2015, in Atlanta. 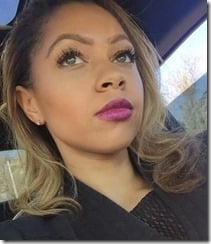 30-year-old Kia Proctor and her man were first spotted together together in 2013 at the Kentucky Derby. They were also seen together in 2014 at the NFL’s post-season awards ceremony.

Is not clear how the two met, but something about being a former party host in the Atlanta area, could have done the trick. Prior to her gig in Atlanta, Kia Proctor is said to have been a stripper who went by the name of Hazel. According to Fabwags, she is a former model who used to dance at a DC strip club.

The stunning Miss Proctor, is also the momma of a teen daughter from a previous relationship. 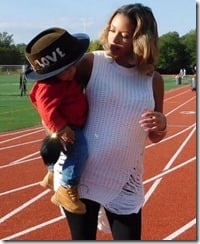 Kia whose real name is Shakia Ladawn Proctor is also known as Erica. Back in 2013 her twitter account used to be “Erica Hazeleyes.”

She was born October 16, 1986 in Virginia to Jerome Proctor and AnnaMarie “Marie” Pistone.

Kia, Shakia or Erica, the lovely wag seems to have left her stripping days in the past to become a full time mommy. She and Cam are currently expecting their second child together. How exciting!