Bridgett Eddins is the mother of former Bills linebacker Robert Eddins –who was found murdered in a home in Detroit on Tuesday night. Her son was 28.

Police have confirmed that Eddins and another man found in the home were shot several times. The perpetrator may have attempted to set the home on fire afterward.

After a college career at Ball State, Eddins signed with the Bills as an undrafted free agent in 2011 and stayed with the team, mostly on the practice squad, for two years. He later played in the Canadian Football League.

He suited up for one game as a linebacker for the Bills in 2011.

Robert and a friend, Ricky McFarland were at Eddins’ father’s home in Detroit Tuesday evening –where they were found shot to death. It was precisely Eddin’s father who found the two bodies in the basement with gunshot wounds.

‘He played pro football. We are all proud of him,’ But it is what it is. We don’t know what happened.

She also said the last time he spoke to him was the evenving prior and added:

‘I know one thing, whoever did it, he wasn’t going out like that,’ ‘He probably told them to give me your best shot that’s how he was.’

He played four seasons at the collegiate level for Ball State. He tallied a combined 17 sacks and seven forced fumbles during his final three years with the Cardinals.

After going undrafted in the 2011 NFL Draft, Eddins signed as a free agent with the Buffalo Bills. 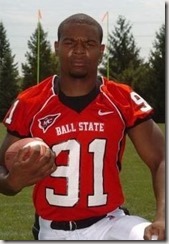 After his NFL career Eddins went to Canada and joined the Saskatchewan Roughriders during the 2014 CFL preseason. During training camp he injured his hamstring. He was cut on June 22, 2014.

Robert III and Bridgett Eddins are also the parents of Robert’s brother, Corderro Eddins. The couple is currently divorced. According to Bridgett Eddins’ social media, she goes by the nickname ‘Aunt B.’

Bridgett Eddins is listed as a molding operator at Magna Mirrors.

Her son Corderro Eddins, works as a Production Worker (Paint Shop) at FCA (Fiat-Chrysler Automobiles), according to  his LinkedIn.

Bridgett Eddins was born January 2, 1968. She attended Central High School and graduated in 1986. She currently resides in Clinton Township, Michigan.