Sarah Allen is the stunning and proud wife of NFL player, Brandon Allen -currently a quaterback for the Denver Broncos.

Sarah’s hubby’s number is up as reports say the 27-year-old is set to start for the Broncos.
Brandon Allen was born September 5, 1992. He has a younger brother, Austin -who has also played quarterback for the Razorbacks.

Brandon graduated from Fayetteville High School in Fayetteville, Arkansas. He was named the offensive MVP of the 2014 Texas Bowl, where he led Arkansas to victory over the Texas Longhorns.
Brandon who played at quarterback, became the all-time school record-holder for passing touchdowns during his career with the Arkansas Razorbacks. He graduated in 2014 with a degree in recreation and sport management.

He was later picked in the sixth round by the Jacksonville Jaguars in the 2016 NFL Draft. He then played for one season with Los Angeles Rams from 2017 until 2018. Earlier this year Brandon was claimed off waivers by the Denver Broncos. 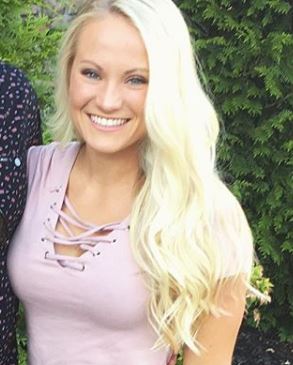 Brandon hasn’t only been a busy man on the field. He and college sweetheart, Sarah -tied the knot over the summer. Sarah became Mrs. Allen on May 2, 2019. The couple tied the knot at Sassafras Springs Vineyard & Winery. The two met after being introduced by mutual friends at a concert. They bonded over their love for animals.

The gorgeous blonde calls herself on social media ‘Football Wifey’ and is also the mother to couple’s two dogs, Bogey and Teddy.
Sarah Connley is originally from Apopka, Florida. Her father’s name is John Connley and her mother is Erin Hundley.
Sarah attended Bentonville High School. According to her LinkedIn, the NFL wag graduate of the University of Arkansas in 2016. She holds a Bachelor’s Degree in Journalism and a focus in Advertising and Public Relations. She is currently listed as working in customer service at Does Eat Place and was previously an intern at Mockingbird Creative.