Bonnie Butler DeCastro is the loving and supportive wife of NFL player, David DeCastro –currently a guard for the Pittsburgh Steelers.

Bonnie’s NFL hubby had been out of action due to a fractured hand but will return to the starting lineup Sunday night. Born January 11, 1990; the Washington native attended Bellevue High School; he received scholarships offers from Oregon State, Washington State, and Washington, but he ended up choosing Stanford instead.

He played his collegiate football at Stanford University –where he earned all-American honors.

DeCastro, a 6 ft 5 in and 316 pound fella, was considered one of the best guard prospects available and was selected in the first round of the 2012 NFL Draft by the Steelers.

He’s been happily married since 2015, to lovely wife and baby mama Bonnie Butler. The two met while attending high school and are the proud parents of an adorable baby girl named, Brooke. Bonnie Butler DeCastro gave birth to their baby girl last October. 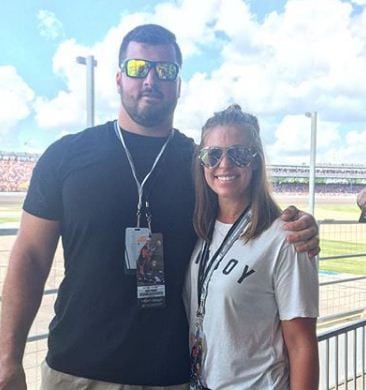 The proud NFL wag and mom of one was born Bonnie Butler on June 2, 1989, in Washington. Bonnie is one of three children born to Briand and Rebecca Butler. She attended University of San Diego graduating in 2012. Is safe to say, Bonnie has a full time job taking care of the couple’s baby girl.

She is however, pretty good in keeping her social media updated with tons of pictures of little Brooke. Check her out on Instagram here.