Cherry Star is the longtime wife of Bart Starr –the legendary Green Bay Packers quarterback who died over the weekend aged 85.

After his retirement Starr became a sports analyst for the CBS network. In 1975, he was named head coach of the Packers, a position he held until 1984. In 1976 Starr was elected to the Alabama Sports Hall of Fame, and in 1977 he was inducted into the National Football Hall of Fame.

The health of the Packers great had been failing for a few years. In 2014 he suffered a stroke and never fully recovered. He is survived by three grandchildren, a son and his wife, Cherry Starr –who remained with him for over six decades.

Cherry Starr was born Cherry Louise Morton, the two met while attending high Montgomery’s Sidney Lanier High School and were eventually married in their 20’s after they eloped in College in 1954. 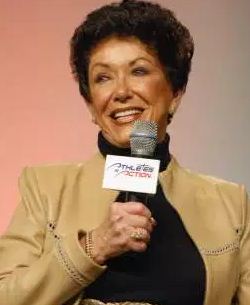 At the time Cherry attended Auburn. They two jumped in a borrowed car and got married by a justice of the peace in Columbus, Mississippi.

During their marriage the couple welcomed two children together, Bart Jr. and Brett Starr. Sadly the couple suffered the loss of their son Brett who died aged 24 in 1988. Brett died of a drug overdose. Bart Jr. is a lawyer.

Cherry and her beloved husband were together for a total of 65-years. She supporter her husband through his career and after his retirement they both spent time doing charity. The couple dedicated countless hours supporting a variety of charitable causes along with furthering the mission of the VLCF.

Cherry Starr also helped co-found a facility designed to help at-risk and troubled boys throughout the state of Wisconsin. The couple became well-known for giving back to the community.

In recent years, Cherry Starr was diagnosed with thyroid cancer and was devoted to her husband becoming his caregiver after his stroke in 2014.