The quarterback for Cleveland Browns, Baker Mayfield, is married to Emily Wilkinson. The couple got married in July 2019. Their marriage went through a test when, in 2021, Baker was accused of cheating on his wife. Let us explore the story and take a peek into Baker and Emily’s love story.

Baker Mayfield is the 2017 Heisman Trophy winner for the University of Oklahoma who was also a finalist for the award the previous year. He was selected first overall in the 2018 NFL Draft by the Cleveland Browns. But you already knew that and we’re here to tell you about lovely Emily Wilkinson. Just give us Emily!!!

Emily Wilkinson is the stunning wife of NFL quarterback, Baker Mayfield -currently playing for the Cleveland Browns. They got married on 6 July 2019.

Baker started dating Emily in 2017. They moved in only after a few days of dating. The relationship culminated in marriage after two years. But the NFL fans were shocked after a woman claimed Baker Mayfield had cheated on his wife.

In February 2021, a woman named Kacie Dingess came forward through an interview. She claimed to have had sexual relations with Baker after a month of their marriage. Though it seemed that his marriage was in danger, Baker and Emily pulled out and are still together ever lovingly.

Who is Kacie Dingess?

According to Kacie’s version of the story, she and Baker started chatting through social media. Later, they scheduled to meet and had sexual relations in a parking lot. Kacie even has Baker’s nude photos that he sent her. All of this was one month after his marriage. Scandalous!!

How did Baker Mayfield meet his wife?

The couple met in 2017. Emily was one of the people who gathered to watch him play after she was invited by a mutual friend. At the time Emily was working as a plastic surgery patient coordinator in California and felt uneasy about Baker’s all-star status on the field assuming he would be the typical playboy athlete.

Eventually, the two went on their first date and a few days later, he moved in with her.

As their relationship progressed quickly, Emily had to quit her job to relocate to Cleveland to be with Baker. They became engaged in July of 2018 and were married a year later this July in California. 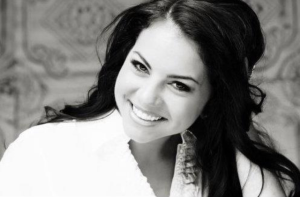 Baker probably doesn’t have a girlfriend now ’cause his wife won’t appreciate it. Hahaha

Duke Johnson had made a public request for being traded, even when he was aware that he was on a trade block by his team. The running back says it is because he feels unwanted. When Baker was asked about his thoughts, he said that it was ‘self-inflicted. He said he hoped Duke would do his job and rise professionally.

After winning a match against the Bengals, Baker expressed his happiness through a little dance. Check it out here and we are sure you will be impressed by the quarterback’s dancing skills.

How old is Baker Mayfield?

The now MLB wag stays busy on social media often sharing images of her lifestyle along with NFL star hubby.

Emily and Baker’s marriage was not shaken by  Kacie’s cheating allegations. The couple wrote each other beautiful Valentine messages, confirming that they were paying no attention to this nonsense.

Emily and Baker got the opportunity to work together for a Progressive Insurance commercial. Emily announced the news on her Instagram. They have worked on a couple of seasons for advertisements.

Emily and Baker signed with Progressive Insurance for an advertising campaign. The ad shows the couple trying to stay home in a stadium. The commercials are funny and attractive.

Mayfield has had no injury record for the last five years. But he encountered minor rib pain in October 2020 against the Colts. He had suffered a concussion in 2015.

Wear the number six on your back. Check out this amazing signed Baker Mayfield jersey here.

Baker Mayfield Beer? What’s the deal with this?

In a match featuring Angels against the Indians, Baker shotgunned a beer and cheered the crowd in support of the Indians. Check out the video;

Emily’s husband was born on April 14, 1995; in Austin, Texas to parents James and Gina Mayfield. He became the first walk-on true freshman to start a season opener for a BCS school. He helped lead his Sooners to the semifinals of the college football playoff in 2015-16 and 2017-18.

He was a walk-on with the Texas Tech Red Raiders before transferring to Oklahoma following alleged issues with scholarship and poor communication with coaches.

Where does Baker Mayfield live with Emily?

Since he is with the Cleveland Browns, he currently resides in Cleveland, Ohio.

Emily and Baker do not share many details about their new home. They might have been residing in Ohio since 2018. Their house can *only* hold 14 guests at a time. The house has mite texture and is less cluttered. The couple prefers earthy tones.

The details of Baker’s arrest were released on 19 June 2017. Baker was arrested for public intoxication, disorderly conduct, and resisting arrest. He pleaded guilty and was fined for the charges. The guy likes a beer, that much is evident.

Baker Mayfield Show, Of course He has a Show!

A show based on Baker’s life was aired in 2018. The show was called up. The show has one season and four episodes. Each episode deals with a different aspect of Baker’s life leading up to his success in the NFL.

The lovely wife of Cleveland Brown quarterback Baker Mayfield is Emily Wilkinson. Emily graduated from the University of Nebraska – Lincoln in 2013. The couple met in 2017 through a mutual friend and got married in 2019. She’s totally hot, so he should be very thankful of his friend. Best friend ever!

Emily Wilkinson Wiki? We’ll give it our best shot

Emily was born April 4, 1991; that’s right she is four years her husband’s senior. She graduated from the University of Nebraska-Lincoln in 2013. After college, she worked at Barry’s Bar and Grill as a bartender. She then landed a job at Galanis Plastic Surgery -where she worked before moving to Cleveland.

We personally like this one, she is just stunning……

Wilkinson married Mayfield in July 2019. She has made a social media star of herself in the meantime. She has a lot of followers on Instagram and often posts about her daily life with her husband.

What is Emily Wilkinson’s Net Worth?

Through her social media deals, advertisements, and other sources of revenue, Emily has built a net worth of around $1 million for herself. She reportedly takes a salary of 300k. Not to mention that her husband is extremely well. The couple has little restraints financially. Perhaps some in the bedroom(s)?

She is the daughter of Lori Wilkinson and Dave Wilkinson. The gorgeous blonde has three siblings, Sammy, Benny, and Annie. Find us a photo and paste it in the comments section below. I bet her sister is hot. 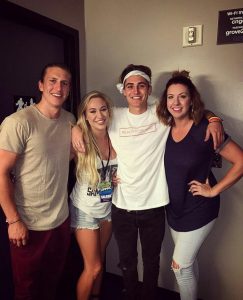 How old is Emily Wilkinson?

There is absolutely no doubt that Emily is an attractive woman. And these photos are all the proof we need.

Use the following handles to follow your favorite quarterback and NFL WAG and her boring superstar husband.