Tammy Reid is the loving and supportive wife of NFL coach Andy Reid –best known for being the head coach for the Kansas City Chiefs.

Tammy and Andy Reid married in 1981 and have been together ever since.

Let’s find out more about Andy and his wife, Tammy, here. 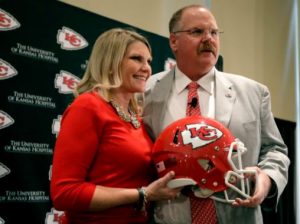 Before becoming a football coach, Andy, a Los Angeles native, played college football at Brigham Young University. That’s where he earned his first coaching position as a graduate assistant at Brigham Young in 1982. And also where he met Tammy. The two met, fell for each other, and were subsequently married.

The coach’s wife and mother of five have dedicated her time to charity work. Ever since her husband began working for the Eagles in 1999, he told Tammy to focus on a couple of charities to devote their attention. Laurel House was one of them, a comprehensive domestic violence agency.

Since then, Tammy Reid and her husband have long been involved in helping domestic violence victims. 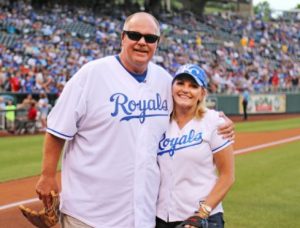 Tammy’s husband was born Andrew Walter Reid on March 19, 1958. Before becoming the head coach of the Kansas City Chiefs in 2013, he led the Philadelphia Eagles to five NFC Championship games and Super Bowl XXXIX. From 2001 to 2012, he was also the Eagles’ executive vice president of football operations, effectively making him the team’s general manager.

As of 2021, Andy Reid is 63 years old. He is one of the best coaches out there with a lot of enthusiasm at that age. 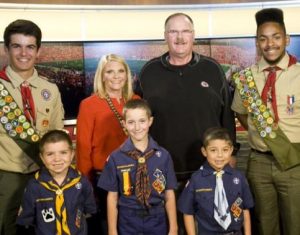 Andy Reid has two daughters and three sons. His family members are a part of The Church of Jesus Christ of Latter-day Saints.

The former college sweethearts welcomed five children into their marriage. They are the proud parents of three sons Spencer, Britt, Garrett, and two daughters, Drew Ann and Crosby.

In 2007 Tamy’s sons Garrett and Britt made headlines after being arrested in separate incidents. While Garret was arrested for drug possession, Britt was held on drug and weapon offenses. They both served time in prison for drug-related offenses and completed drug rehabilitation programs.

In 2012, the couple suffered the loss of their oldest son, Garrett Reid. He was found dead August 5, 2012, in his room at training camp at Lehigh University. The cause of death was said to be a ****** overdose. At the time, Garrett was working for the Eagles as an assistant to the strength and conditioning staff.

Britt is now a married man and worked as a graduate assistant for the Temple University football program. Spencer Reid played running back at Temple.

It was in 1992 that Andy Reid began his journey as a head coach at the NFL level. He served as the head coach of the Philadelphia Eagles from 1999 to 2012. Later, he became the head coach for Kansas City Chiefs from 2013.

(Special Note: You can checkout our roundup’s of the Top Hottest Wags from the Philadelphia Eagles here, and the Kansas City Chiefs here.

He previously worked as an offensive assistant at Green Bay Packers from 1992 to 1996. For the next two years, he was a quarterback coach before beginning his Philadelphia Eagles journey.

(Special Note: You can find our roundup of the Top Hottest Green Bay Packers Wags here.)

In 2020, Andy Reid won the Coach of the Year Award. During his term with the Philadelphia Eagles, he coached Michel Vick in 2010, who won the Year’s Comeback Player.

With the Kansas City Chiefs, he coached three prominent players who won various titles. Without any doubt, Andy Reid is one of the best football coaches in America.

He coached Kansas City Chiefs so well that they went three times straight to the championship game and made history. This is something no other coaches could do. Though Andy Reid is an old coach, no one could be better than him.

Under Andy Reid’s coaching, his team went to the playoffs around 19 times. He also coached for Super Bowls and NFC championship games. While he coached three super bowls and eight championship games, he won the NFL coach of the year title thrice and hit a record.

Two of his assistants won the super bowl, and eleven became head coaches after working under his guidance.

Ever since Andy married his wife, Tammy, he became a Mormon.

Tammy Reid is also the proud grandmother of at least five grandchildren, Maverick, Somers, Saylor, Blake, and Canyon. Tammy and Andy have been together for a really long time and are one of the most adorable couples ever.

How Old is Andy Reids Wife

Andy’s wife’s age is not publicly known. If you have any information that can shine a light on this for us, please drop a note in the comments section below.

Unfortunately, Tammy Reid is not active on social media and hence does not appear to have a Facebook account. 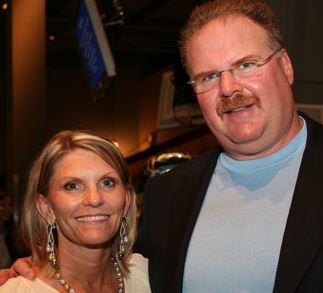