Alexandra King is the alleged former girlfriend of NFL star, Jimmy Garoppolo –currently a QB for the San Francisco 49ers.

King made headlines earlier this year when she went public with the rumored romance, but apparently the relationship was only in her head. King believed she and Jimmy were in an official relationship, however he later revealed in a feature for Bleacher Report that he was not aware of the relationship that many believed existed!

James Richard Garoppolo was born November 2, 1991; the Arlington Heights, IL native attended Rolling Meadows High School in Illinois. He won the Walter Payton Award as the most outstanding player in FCS football in 2013.

Jimmy was selected in the second round of the 2014 NFL Draft by the New England Patriots after a standout collegiate career with the Eastern Illinois Panthers. He won Super Bowls XLIX and LI with the Patriots, serving as a backup to Tom Brady. He was traded to the San Francisco 49ers last year. 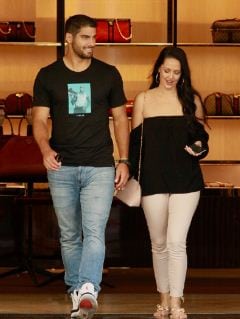 In recent news, the 26-year-old QB suffered a knee injury in Sunday’s game, he was taken to the team bus on a cart. That’s when former lover, Alexandra King resurfaced form the dead and simply posted on her Instagram story the word ‘karma.’ –Could it be that she directed the post to Garoppolo?

King who is a stunner form head to toe, certainly has been getting a lot of attention since. She was born Alexandra Rose King and is an instagram model with over 24k followers on social media.

During happier times, the alleged couple were pictured together having a blast during a trip to Disney. King also shared images of the two spending valentine’s day together. The 23-year-old model is currently based in Los Angeles. She writes on her social media bio, ‘alpha’ and adds a link to East Coast Glam.