Zana Muno is the girlfriend of NFL player Josh Rosen –known currently as a quarterback for the Arizona Cardinals.

Zana’s boyfriend is a former UCLA quarterback who was selected 10th overall in the 2018 NFL Draft by the Arizona Cardinals. He played three years of college football. Born February 10, 1997; the California native was a top-10 ranked tennis player as a junior. He switched focus from tennis to football just before high school. He attended St. John Bosco High School –where he threw for 11,175 yards and 90 touchdowns.

Rosen, nicknamed ‘chosen Rosen’ and ‘the chosen one’ surely expected to get the first overall pick in last month’s draft, however, is safe to say he wouldn’t win a popularity contest. In an odd twist, even his girlfriend could be indirectly the reason the Browns passed on him.

A Browns exec, recently revealed seeing the UCLA volleyball team at the airport and approached the coach to get a sense of Rosen’s character. The coach referred Highsmith to Rosen’s girlfriend, and without talking to her, he evidently had heard enough. So who is Zana Muno? 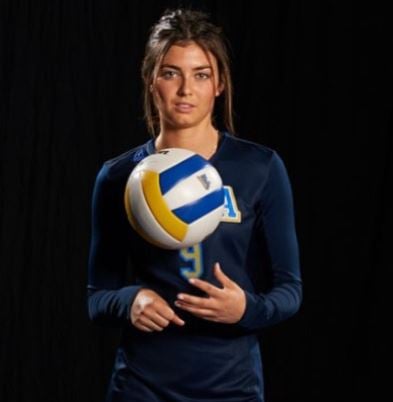 The two met while attending UCLA. While Rosen was the hot shot quarterback with a real chance to make it pro, Zana did her own thing as a member of the school’s volleyball team.

The Defensive Specialist is a Hermosa Beach, California native who attended Notre Dame High School. She was born Susannah Marie Muno to parents Kimberly and Lawrence Muno. According to her bio, her mother is a former golfer, father is a former college football player.

She grew up in Torrance, California along with an older brother who goes by JJ.

The pretty brunette can count with her own list of achievements. She helped UCLA win the beach volleyball championship this year –all while dealing with a torn ACL. The NCAA champion made history as she and rest of the UCLA Bruins volleyball team beat Florida State to win the first title in its program’s history.

The sophomore has been described by the LA Times as a ‘queen on the beach and indoors.’ Zana is a sociology major.