Jean Dolores-Schmidt is the adorable nun who is causing quite the stir in the world of college Basketball.

Jean Dolores-Schmidt happens to be the chaplain of The Ramblers –the men’s basketball team at Loyola Chicago –the team happens to be competing in their first NCAA tournament since 1985.

At 98-years-old Sister Jean Dolores-Schmidt tries to attend most games and when she does she can be seen huddling up with the players before every game as she says a prayer for the squad. Her attire is quite flashing as well, as she can be seen wearing maroon-and-gold Nikes with her name on the heels.

Want to know more? Check out her top facts below. 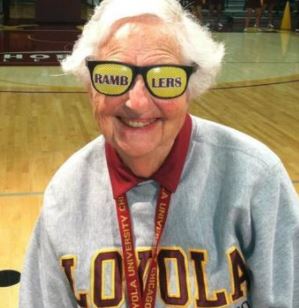 Jean Dolores-Schmidt has become one the most recognizable figures in US sports following the team’s back-to-back upset wins in the NCAA Tournament.

#2 She’s served as the men’s basketball team chaplain since 1994.

Sister Jean began teaching at Mundelein College in 1961, a school which merged with Loyola in 1991. In 1963, the Ramblers won the NCAA tournament championship, a 60-58 upset win of two-time defending champion Cincinnati.

#3 She was born in San Francisco

Sister Jean was born in 1919 in San Francisco, according to the Chicago Tribune. She played basketball during high school; after graduating, she joined the Sisters of Charity of the Blessed Virgin Mary convent in Iowa.

#4 She taught elementary for two decades

Prior to Mundelein, Sister Jean taught for twenty years in several elementary schools in the Los Angeles Archdiocese.

#5 She has been appointed a number of roles

At Loyola, Sr. Jean has been an academic advisor, campus minister on LSC and WTC, Chaplain to the men’s basketball team and to Regis Hall residents.

#6 She is responsible for the SMILE Program

The SMILE program (Students Moving Into the Lives of Elderly), is a partnership between Loyola students and residents of The Clare Retirement Facility. In her Regis apartment, she conducts a weekly Prayer Group composed of students from various halls.

#8 She made an immediate impression on TV audiences

Sister Jean was seen cheering and celebrating in her wheelchair following Loyola’s win over the higher-ranked Miami. She was interviewed and her love for the team and her basketball smarts won viewers’ hearts.