Kirstyn Thomas is the understanding and supportive girlfriend of college basketball player, Nigel Williams-Goss. Her basketball beau is a pint guard for the Gonzaga Bulldogs.

Nigel Williams-Goss was born September 16, 1994. The Happy Valley, Ore. native spent two seasons with the University of Washington Huskies men’s basketball team before deciding to transfer to Gonzaga University in Spokane, Washington before the 2015–16 season.

Nigel Williams-Goss, the son of Virgil Williams-Goss, Valerie Williams-Goss –played high school basketball at Findlay Prep in Henderson, Nevada. Aside from his parents, Nigel biggest supporters include his beloved grandmother Barbara, who was diagnosed with cancer a little more than a year ago.

Nigel completed his undergraduate degree in psychology last semester with a 3.84 grade-point average and was named to the Academic All-America Division I basketball first team. He is currently working on his master’s degree in organizational leadership at Gonzaga. More recently he helped the Zags advance to their first Final Four. 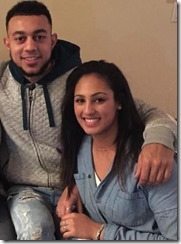 Kirstyn Thomas and Willaims-Goss are one of those couple’s who have sports as a common denominator. Kirstyn is also a student athlete who plays softball for the University of Washington –where the two met.

Thomas graduated from Bush High School and accepted a full scholarship to play softball for the University of Washington, she is currently in her junior year. Accoridng to her bio on the Huskies page, she’s an anthropology major. 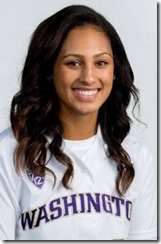 Kirstyn Thomas is the daughter of Darrell and Karen Thomas. She was born December 10th, 1995.

The 5-11 pitcher hails all the way from Houston, Texas. She was raised along with one older brother, Dillon –who is currently an outfielder in the Colorado Rockies’ organization.

She posted a 1.66 ERA while striking out 171 batters in 16 wins and batted .600 her junior year, she was also voted Most Valuable Player of Fort Bend.

During her Freshman year at UW, she finished the season with a 3-2 record. In 2016 she made 17 appearances, primarily as a pinch hitter, while making one start as the designated player. She registered four hits, a home run and two RBI in sophomore season.

Kirstyn Thomas is currently settled in Seattle, Washington meaning she and Williams-Goss are doing the long distance thing.