Mickie’s husband has been since 1980, the head men’s basketball coach at Duke University. A Chicago native, Michael William Krzyzewsk was born February 13, 1947.

He is a former player who graduated from West Point. As a coach, Krzyzewski has led the Blue Devils to five NCAA basketball titles, 12 Final Fours, 12 ACC regular season titles, and 15 ACC Tournament championships.

But as they say, behind every success story, there’s a strong woman to back it up. Mike has been married to wife Mickie, for decades. As a funny fact, Mike met Mickie, when he was home on break from West Point. At the time she worked as a stewardess. The two went out on a date, and at some point he revealed that she had been his third choice. She found the fact that he told her the truth, fascinating. 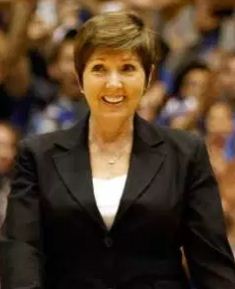 The couple tied the knot in the Catholic chapel at West Point on the day of his graduation in 1969. Together they raised three daughters, Debbie, Jamie and Lindy. Mickie and Mike also have eight grandchildren.

Mickie Krzyzewski was born as Carol Marsh to Frank William (Bill) Marsh and Margie Lee Marsh. Her parents were married for 62-years. According to an obituary her father died in 2004 and her mother in 2018 at the age 92.

In June of 2004, to celebrate their 35th wedding anniversary, Coach K and wife Mickie, renewed their wedding vows in the Duke Chapel. The longtime college basketball spouse has been a staple at Cameron stadium for decades.

The Krzyzewskis keep busy running the Emily K Center, named after Mike’s mother. The Durham-based, non-profit organization was established in 2006.