Cindy Self is the loving, caring and supportive wife of college basketball coach, Bill Self –who is the man leading the fellas at the University of Kansas.

Cindy has been Mrs. Self for nearly 30-years. The couple has been married since 1988 and together are the proud parents two children. No doubt Cindy has been her hubby’s number one fan and she certainly has a reason to be proud.

Her hubby started his Kansas coaching career in 2003 – making him just the eighth coach to take the helm of the Jayhawks program. Since taking over the team, Self has won the 2008 NCAA national title, a KU record-setting 11 straight regular season Big 12 Conference titles.

Self posts an all-time record of 175-9 in Allen Fieldhouse. He is also one of a handful of active coaches who have led three different team to the Elite Eight round of the tournament.

But long before he became one of the highest paid coaches in college basketball –which wasn’t always a given, there was Cindy, his college sweetheart now wife. 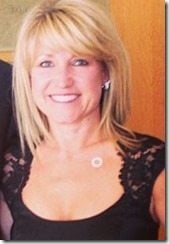 Cindy Self met her husband while they both were students at Oklahoma State University. The pair met back in 1984, at the time the blonde was a cheerleader and Bill, a 6-foot-3 basketball player for the Cowboys, they quickly hit it off.

The typical stereotyped couple, ended up exchanging vows in a ceremony in 1988 after four years of dating.

According to Fabwags, she attended Yukon high Schoo, graduating in 1982. She holds a master’s degree in elementary education. 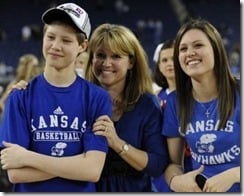 As if being Kansas State first lady, an a dedicated mother wasn’t enough, Cindy Self also finds the time to help out in whatever way possible the KU basketball team and is a caring community member.

She and her husband are both hard workers with their ASSISTS Foundation.

ASSISTS Foundation is a foundation started by the Self family, in 2008, with the goal of raising one million dollars yearly to help area youth. Bill Self states that the vision of the foundation is “to promote wellness with our youth, and in particular with obesity and diabetes.”

Cindy’s daughter Lauren, graduated in 2013 from KU, she works for the Christian ministry Young Life in Richardson, Texas; and is married to Hayden Browning since 2014.

Son, Tyler is a point guard for Kansas Jayhwaks.