Brooke Copeland is the hot girlfriend of college basketball player, Justin Jackson, you know, just one of the Tar Heels star players.

Saying that Brooke Copeland has caught our attention just because she happens to be the lucky lady dating Jackson wouldn’t be entirely accurate, the college student also has a few things going for her.

As for her man, Jackson plays a small forward for the North Carolina Tar Heels men’s basketball.

After committing to North Carolina, he hasn’t slowed down. He ended his freshman season in 2014 with 23 points off 11-of-12 shooting, making him the game’s top scorer. He also won the Jack Daly Award for sportsmanship.

And that’s hardly all, for the 2015-2016 season he was UNC’s fourth-leading scorer at 12.2 ppg and was fourth in assists with 113. He had the second-best assist/error ratio (2.7) on a team that led the ACC, was third in the nation and was the best in UNC history.

Currently in his junior year, Jackson won ACC Player of the Year, selected First-team All ACC, and named a Consensus first-team All-American in 2017. 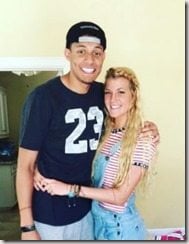 Now, lets get to the good stuff, Brooke Copeland. She could be described as the female version of Justin. Copeland who goes to the University of Florida is also an student athlete .

She is a 6-foot-2 guard for the Florida Gators who just finished up her junior season. According to her Gators profile, she started seven games for Florida and averaged 4.7 points to go along with 2.2 rebounds for the season. 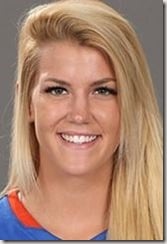 Copeland started in 15 games as a freshman and averaged a career-best 5 points per game that season.

She previously played while attending Bradley Central High School –where she graduated in May 2014. That same years she was ranked as No. 10 post player in the country and No. 70 overall and finished eighth on Bradley Central’s all-time scoring chart with 2,232 points.

Brooke isn’t the only player in the family, both her parents played sports in college and her siblings also play sports too!

She is the daughter of Kim –who was a four-year basketball letterwinner at Chattanooga State University. Her father Brian, played collegiate football at Tennessee Technological University.

Her older brother, Bryce Copeland plays basketball at at Lee University in Cleveland, Tennessee; while younger brother, Cole, is a standout football player at the University of Tennessee at Chattanooga.

The **** blonde is a telecommunications-production major and like Jackson is also very religious. In facts in an article written by Jackson himself for The Player’s Tribune, he claims is her who has moved him closer to God. In it he also reveals, one day he hopes to marry her.

Don’t they make the cutest couple?