James Arthur Boeheim is best known as Jim Boeheim, the 74-year-old needs little introduction, he has served as the coach for the Syracuse men’s basketball team for over four decades.

Apart from his brief stint in the pros, Boeheim has spent his entire adult life at Syracuse University as a student, player, assistant coach or head coach

He was first named head coach of his alma mater in 1976. Since then, he’s become a legend in college basketball –guiding the Orange to ten Big East regular season championships, five Big East Tournament championships, and 33 NCAA Tournament appearances. He won a National Championship with Carmelo Anthony in 2003.

In 2002, Syracuse’s Carrier Dome court was named after Boeheim in honor of his great accomplishments at the University. Jim was inducted into the Hall of Fame in 2005. 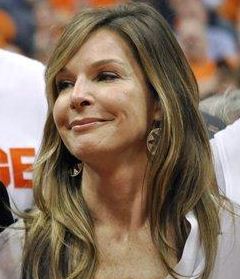 The couple met in Lexington, Kentucky at a Derby Day party and married in 1997. She is 21-years his junior and the mother of the couple’s three children.

Juli was born in Miami, Fla., and raised in Kentucky. She has an undergraduate degree in merchandising, apparel and textiles with an emphasis in marketing from the University of Kentucky. The blonde also holds a master’s degree from SU in child and family studies with a focus on infant and young children with disabilities.

When not busy being a coach’s wife and mother, Juli Boeheim is known for the “Basket Ball” –an annual event, which closes to $4 million in donations. She and her husband founded the Jim and Juli Boeheim Foundation in 2001; it strives to enrich the lives of children in need in the Central New York community. In addition, Juli has also worked at the Syracuse University, ARC Foundation, Child Advocacy Center, and SUNY Upstate Medical University.

Juli has been awarded a number of times for her charitable efforts.

Jim was previously married to Elaine Boeheim from 1976 until 1994. Together they share one child.

The former couple met at an oral surgeon’s office where Elaine was working as an assistant. He would bring the players over for exams, and eventually he asked her out. They married in June 1976, two months after Boeheim got the head job. 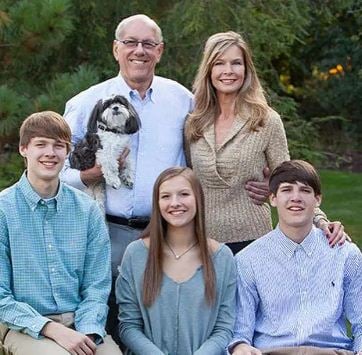 Jim is the proud father of four children. His first child, daughter Elizabeth was adopted around 1985 while he was still married to first wife, Elaine. He was 42, when the former couple decided to adopt her.

Elizabeth Boeheim lives in Montana where she hikes and kayaks. She is a graduate of Colby College.

James and twins Jack and Jamie –were born from his marriage to second and current wife, Juli.

Son James, who goes by Jimmy, is a sophomore at Cornell University. Jamie is a freshman at the University of Rochester; and her brother Jackson who is playing at Syracuse University.