Annalise Dale is the stunning new wife of veteran NFL player/magician, Jon Dorenbos –who is currently a player with the New Orleans Sainst.

While attending the University of Texas-El Paso he played linebacker and fullback and was signed by the Buffalo Bills as an undrafted free agent in 2003. The veteran long snapper played two seasons with the Titans and the Bills but has spent most of his career with the Philadelphia Eagles, after playing 11 seasons for the team.

He was named to his first Pro Bowl in 2009 as a Philadelphia Eagle player. The 37-year-old was traded to the Saints last month and during his physical for the new team, it was discovered he will required open heart surgery after being diagnosed with an aortic aneurysm.

Luckily for Dorenbos, wife Annalise Dale, will be by his side. 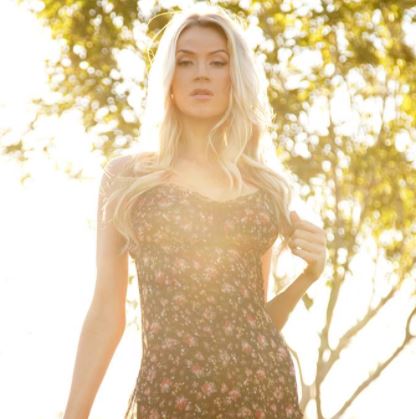 He and wife Annalise Dale tied the knot earlier this year but he was previously married to first wife, Julie from 2010 until their divorce in 2015.

Getting back to the stunning NFL wife, Annalise Dale is a Las Vegas casino host turned casino executive. The two began dating in 2015 and tied the knot in front of the beach in Mexico on June 2017. The lovebirds honeymooned in Bora Bora.

According to her social media info, the **** blonde hails from Denver, Colorado but is currently a Las Vegas resident. She worked as a casino host at Cosmopolitan of Las Vegas and is listed as a Customer Development Executive at MGM Resorts International.

Her hubby rose to national stardom with his 2016 appearance on America’s Got Talent. It was there that the country learned of Dorenbos horrifying and trying childhood. He turned to magic after his father, killed his mother when he was 12-year-old.