Kathleen’s hubby has a long history with football, the Birmingham, Alabama native played a wide receiver in college for Alabama.

He made his head coaching debut for Clemson in 2008. He led Clemson to the NCAA Championship game in 2015-16 and an NCAA Championship title the following year. The 49-year-old also won the Bobby Dodd Coach of the Year award in 2011. 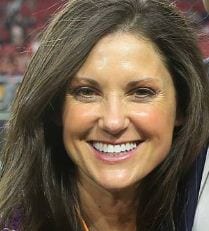 Dabo also has under his belt 3 Consecutive 12 win Seasons and is the First coach in college football history to win a bowl game five consecutive years. He is also the only coach in the country to beat a top 25 team in a bowl game each of the last five years. Is safe to say the 49-year-old has numerous accomplishments and honors to his name. However, he’ll be the first to admit he couldn’t have done without the support of his longtime wife, Kathleen Swinney.

He’s been happily married to Kathleen Swinney since 1994. She is the mother of the couple’s three children, sons Will, Clay and Drew. The lovely wife and mother of three, is dubbed the first lady of Clemson football.

She then took time off to take care of her children and has since also become a substitute mom to Clemson football players who are often far from home. Kathleen Swinney –born Kathleen Bassett on March 27, 1971 –is not only supportive of her husband’s career but also helps recruit players and feeds those who find their way to the house.