Chakeya Crawford is the wife of disgraced Ex-West Virginia star running back, Justin Crawford -who has been sentenced to major time behind bars.

Chakeya’s husband pleaded guilty to committing a *** act with a 12-year-old girl and was sentenced to 12-years in prison. Crawford who was arrested last October, was charged with incest, child molestation, sodomy and enticing a child for indecent purpose.
However, he cut a deal with prosecutors this week to enter guilty pleas. He admitted to having intercourse with the girl. Crawford also claimed it was her idea.

24-year-old Crawford is a graduate of Hardaway High School in Columbus, Georgia. He played college football at Northwest Mississippi Community College for two seasons before transferring to West Virginia University. 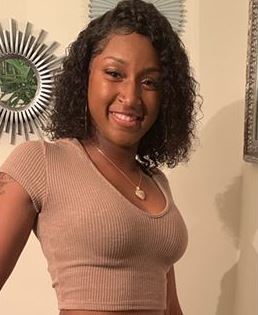 Chakeya Crawford was allegedly present when the alleged incident took place. According to reports, her husband’s victim spent the night at their home and Chakeya even said to a detective that she woke up around 5 a.m. on October 13; she went into the living room and saw her husband standing over the 12-year-old with his private parts exposed.
After Justin denied anything suspicious was going on, Chakeya although uneasey about the situastion, went back to bed.
Chakeya Crawford was born Chakeya Mullins who can also be found on FB as Chakenya. She attended Hardaway High school where she played volleyball.
She and Justin tied the knot in 2015. She is also the mother of the couple’s two young sons, Jay’Dense and Justin Jr.
The two became husband and wife before his sophomore year of college. At the time, Justin got a job at Taco Bell to support his young family -something that was praised by his coaches.

It is not clear if Chakeya and Justin Crawford are still married.