Melinda Mays is the proud mother of college football player, Cade Mays -who until recently played for Georgia.

Melinda’s son was a five-star recruit at Knoxville Catholic and was the No. 1 ranked recruit in the state in the Class of 2018.
According to recent reports, her son has left the Georgia football program, reportedly to transfer to Tennessee.

Cade Mays was the cornerstone of Tennessee’s 2018 recruiting class for over a year. Despite the fact he was a legacy to Tennessee, his father Kevin Mays played for Phillip Fulmer on Rocky Top and the family lives in Knoxville, Cade signed to play for Kirby Smart at Georgia.
He was a Freshman All-SEC pick in 2018, when he played in 11 games and started seven for the Bulldogs. The 6-foot-6, 318-pound Mays started 11 games at four different offensive line positions at Georgia in 2019.

Melinda’s other son Cooper, will be reunited with his brother as the Vols recently signed Cooper Mays as a four-star member of the program’s 2020 recruiting class. The two brothers will be reunited after sharing the same high school field at Knox Catholic back in 2017. 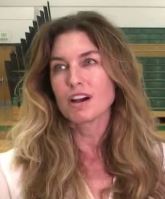 Melinda Mays and her husband, James Kevin Mays filed a lawsuit claiming damages after the father had part of his right pinky finger partially amputated when a folding chair wedged it against a column. Kevin Mays began his career as a defensive tackle and wore No. 96 in the 1991 and 1992 season, Mays made nine tackles on the defensive side of the ball before moving over to the offense and switching to No. 67 in 1993. The Kingston, Tenn., native was also an SEC Academic Honor Roll selection as a senior.
Melinda Mays was born Melinda Frogg on June 21, 1971. Her brother, Michael Frogg, played center for the program from 2004-2007.
Melinda Mays and her hubby both graduated from Tennessee. They met as high school seniors at rival schools and are entrepreneurs. They own finance and healthcare companies.
She and her husband reside in a 120-acre farm in Kingston, TN.